The Olympics: World's Fairs of the 21st century?

What World's Fairs once were, the Olympics have become: a chance to get along on a global level while holding onto national pride. Humanity gathering for what it hopes are larger, nobler, more lucrative purposes. 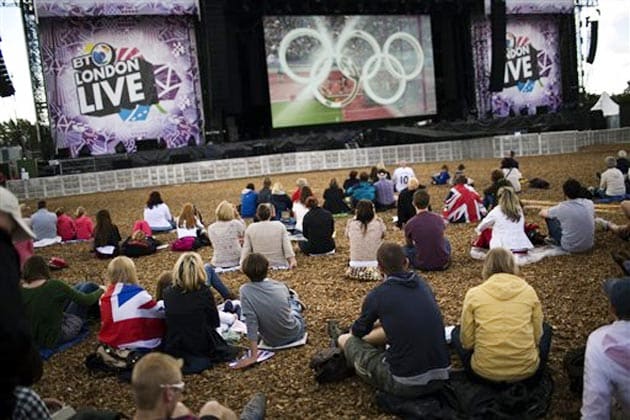 London: It rose in England's capital with the promise of showcasing humanity's best: supreme accomplishments, fresh technologies, people from far-flung lands and their cultural traditions. It was both trumpeted as a global achievement and dismissed as overly commercialized "trumpery."

It was not the Olympics.

Just a few miles up the road from the teeming venues of today's Summer Games, Victorian London famously convened a gathering called "The Great Exhibition." It was 1851's version of a global event, and it was designed to tell mankind's story - albeit from the vantage point of a potent colonial power.

It came to be called a "World's Fair," and it inaugurated an era of them. Paris and St. Louis, Rome and Vienna, Osaka and dozens more, each with epic storylines: "Festival of Empire." "Century of Progress." And "The World of Tomorrow," the 1939 World's Fair in New York, where, for the first time, television entered the popular consciousness.

Once, World's Fairs were the primary chroniclers of human progress. Not so much anymore. But to wander the grounds of the 2012 London Olympics this past fortnight is to see that in the 21st century, the value and relevance of such events still endures.

What World's Fairs once were, the Olympics have become: a chance to get along on a global level while holding onto national pride. Humanity gathering for what it hopes are larger, nobler, more lucrative purposes. The Olympics are a place where the cutting edge is showcased. And in a civilization where so many are connected in such disconnected ways, they are that rare opportunity for an amplified, collective voice to say, or try to say: This, right now, is the story of who we are.

"It's the shopfront to show what we can achieve," says Pryderi Baskerville, a Welshman who helped produce the opening ceremony.

That message - both achievement and shopfront - is on display everywhere in Olympic Park, courtesy of the IOC and its corporate sponsors and partners. Nivea invites you to "say hello to the world." At one Olympic Park entrance, a huge sign speaks of "a whole world brought together" - accompanied by some familiar brand logos. Many nations have set up guest houses around London - not unlike EPCOT Center pavilions - where visitors can go to party in the style of the nation that's inviting them inside.

Officials, too, are saying the same thing. "The greatest show on Earth," London organizing committee chief Sebastian Coe calls the Olympics. IOC President Jacques Rogge says they "set an example for us all."

"The Olympic Games have a unique ability to touch people's lives and to change the way they think about themselves and their futures," Prime Minister David Cameron writes in the official Olympics program.

Jonathan Freedland, writing in The Guardian the day the Olympics began, spoke of the "hundreds of thousands, and hundreds of millions more via television, drawn by that perennial human compulsion to see what our species is capable of at its best: to see how strong, how fast, how beautiful we can be."

Sure, some of that is simply organizational enthusiasm - or, just as likely, mere marketing. But is something more significant afoot? Beyond the layers upon layers of sponsor-friendly calibration, is there a message that we humans still need to tell each other, even in this conversation-saturated age?

"It has to do with human understanding, exchange, peace and so forth. Those global international gatherings are always about that," says Paul Greenhalgh, author of "Fair World: A History of World's Fairs and Expositions from London to Shanghai, 1851-2010." Three of the earliest Olympics, he notes, took place at World's Fairs.

Both World's Fairs and Olympics, he says, have offered nationalism, politics and an "ethos of progress." But while World's Fairs have drifted off center stage in the past generation, the Olympics seem to gain both cultural currency and opportunities to showcase progress in the form of corporate presence.

Even with today's Olympics, Greenhalgh says, "These are almost Victorian ideals - a growing moral sense that we owe it to ourselves to improve the whole of society, and the underlying notion of progress."

Progress has often been showcased in technological ways - consider the "Futurama" exhibit in the 1939 New York fair - but a futurist from that era of streamlining would be overwhelmed by what the London Olympics have to offer.

There are contactless payment systems (from sponsor Visa), freshly minted mini tablet-phones with easy videochat functions (from sponsor Samsung) and even, in the cycling arena, innovative battery-operated hot pants to keep competitors' thighs warm. Environmentally friendly speedsuits fashioned from plastic water bottles. Bendable barbells for weightlifters. The list goes on. When it comes to fresh tech, this is precisely the "World of Tomorrow" that our forebears were dreaming of.

"Twenty years ago, we were in Barcelona looking at the first HD signals on a TV set," says Ed Hula, the editor of Around the Rings, a publication that covers the Olympics.

"That's where this sort of stuff had its proving ground is in the Olympic theater," Hula says. "The Olympics provide that first step for new technology. It behooves the Samsungs and BMWs and others to make the most of this opportunity and have something to show people."

They take full advantage on all platforms. Does Usain Bolt look great on the track? Then let's put him in a larger-than-life Visa ad, striding forward into the future holding a credit card in his hand as mall-walking Olympic visitors surge beneath him. Particularly useful that the passers-by are people of many colors, chatting in languages from Mandarin to Arabic to Portuguese. Like the World's Fairs, everyone plays a part in the show.

"You've got global theater going on," says John J. Bodinger de Uriarte, an anthropologist at Susquehanna University in Selisgrove, Pa. He sees it as an effort to promote globalism - but a globalism that acknowledges, through resources expended and medals won, who the real powers are.

"One way to look at the Olympics is an affirmation of the world order. We're competing equally - but wait a minute, we're also not," Bodinger says. But either way, "By having these heroic feats by people in many countries, you say, 'Oh, well, this is possible.'"

It is one of amiable multiculturalism - in pursuit of athletic excellence, yes, but also in the service of creating that many more potential consumers of products. It is a story in which the notion of corporate benevolence plays a key role, in which the hopefulness of the "Olympic truce" winks at politics without letting it consume the entire event.

More than everything else, it is the can't-we-all-just-get-along aesthetic of a post-Benetton society, superimposed upon the most elegant iteration of the global shopping mall.

World's Fairs do still exist. There is an organization in Paris called the Bureau of International Expositions that promotes them, including a reasonably successful one in Shanghai in 2010 and one set for Milan in 2015. But they are not the attention-getting global events they once were. Meanwhile, the Olympics seem more popular than ever.

Why is that? Could it be that a society stitched together by airplanes and multipurpose data bytes no longer feels the need to gather explicitly to refresh its own story? Is that too top-down for the social-media era? Baskerville, the Welshman from the opening ceremony production team, thinks that's what a modern Olympics now offers.

"We don't get many times to show what we're capable of," he says. "We're capable of horrible things as humans. And maybe this is something that unites us."