The Gagan Narang I know

Gagan Narang had a dream. It was born in Beijing 2008 and was realised on Monday, thousands of miles away in London. NDTV's Rica Roy gives an insight into the champions mind. 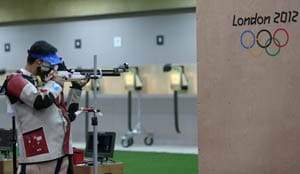 Gagan Narang had a dream. It was born in Beijing 2008 and was realised on Monday, thousands of miles away in London. NDTV's Rica Roy gives an insight into the champions mind.

On 18th of August 2008 morning a postman came and delivered me a postcard that had a picture of the Bird's Nest and the message read " JUST TO TELL YOU, I GAVE MY BEST".

The postcard was sent to me by Gagan Narang from Beijing. He had penned down hours after he missed the finals at the Beijing Olympics and saw his dear friend Abhinav Bindra go on to win a Gold medal.

Gagan had dreamt to be on the podium in Beijing. But he had to wait for four years for Olympics glory. The journey from Beijing to London has been nothing short of ardous. Gagan must cherish this moment!

Those days post the Beijing Olympics keep replaying in my mind. I had met Gagan on a shoot and he drew out circles to explain how closely he missed the finals at the Beijing Olympics. He had shot 595, a point less than Bindra but that was not good enough to get him into the final round. Narang kept drawing them over and over again to tell himself he was near yet far...a mistake he will try to forgive himself for but not forget!

Gagan is not the fittest in the 81 member Indian contingent but he is mentally very very fit. It is apt to call him a lazy genius! It was always on the back of his mind that he had to get an Olympic medal for his parents who got him his first gun, selling their only plot of land in Hyderabad. Talking about Gagan and Hyderabad, he has 'Nawabi taste' in food, art and culture. His ancestors are from Multan and I often take the liberty of calling the lazy genius- Sultan of Multan. But unlike the original Sultan of Multan Inzaman ul-Haq, he picked up the gun for glory.

Post the Beijing debacle, Gagan was heart broken but his resolve became stronger. He did not take his foot off the pedal. Gagan came back with a vengeance, winning the World Cup finals in Bangkok and shooting a 600/600 score. The day co-incided with Barack Obama winning the US elections and becoming the president. Obama is one of Gagan's heroes and he was inspired by Obama's speeches in the run up to the elections. From there on there was just no stopping GA-GUN. He brought laurels for India at the World Cups and the World Championships. But the only medal missing from his trophy cabinet was the OLYMPIC MEDAL.

And Gagan always had that at the back of his mind! There is a strange 'bullish' obsession our MAN OF THE MOMENT, Gagan Narang! There are 50 shades to him. He may not show them but these four years he obsessively thought about and dreamt about the podium. He has had several personal set backs but the champion in him always fought back. He rose from the ashes, every time he was written off. Critics called him a 'cry-baby' when Gagan said he was demotivated to shoot at the Commonwealth games after being ignored for the Khel Ratna. But his reply to that came in the form of 4 gold medals at the Delhi games.

Perhaps the best thing that happened to him in this period was Stanislav Lapidus joining him as his coach in 2009. He knew Stass from before and Gagan reccomended him to the shooting federation. Stass and Gagan go back a long time. Infact Gagan's passion for photography was nurtured by the coach. Stass not only gave him the technique to shoot with a gun but with a camera as well. In the last few years Gagan has developed into a very fine photographer. However in London he isn't armed with his Canon D10 but his Galaxy s3. Gagan has been having fun clicking moments from the London games. I am sure our Olympic champion would like to make it for the 100m final and watch Usian Bolt in action. Â

Gagan's interests are varied- cars, gadgets, remote controlled helicopters, planes, the list is endless. The boy loves his toys, it helps him keep away the pressure. And that's not all, he runs an academy in Pune called Gun For Glory. He always says that he is a product of the system and it's his duty to give back to it. GFG is just a year old and in the past one year the young guns from the aademy have won 68 international medals. Gagan wants to give them what he did not have, at the start. In starting Gun For Glory, Gagan encountered various hardships and the biggest was funds.

Side by side training for the Olympics, Gagan was involved with the day to day running of the academy. There were times when his well wishers thought that the 600-man (having shot scores of perfect 600 twice in competitions) was losing focus. In the run up to the Olympics he wasn't even dubbed as a favourite. But it is hard to detach Gagan from his obsessions. One of them surely, the Olympic medal

I am sure staying away from the country and from the constant media pressure helped him this time around. Â

And the tonic of victory he has got today may just help Narang to change the colour of the medal in his next two events.

Comments
Topics mentioned in this article
Shooting Olympics 2012 India
Get the latest updates on ICC T20 Worldcup 2022 and CWG 2022 check out the Schedule, Live Score and Medals Tally. Like us on Facebook or follow us on Twitter for more sports updates. You can also download the NDTV Cricket app for Android or iOS.