Indian challenge in women's table tennis ended in the first round itself as Ankita Das crashed out losing 1-4 to Spain's Sara Ramirez at the ExCel centre here. 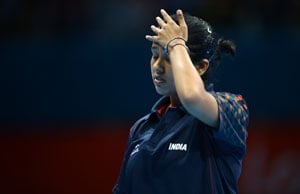 Indian challenge in women's table tennis ended in the first round itself as Ankita Das crashed out losing 1-4 to Spain's Sara Ramirez at the ExCel centre here.

The 19-year-old Indian, who was playing in her first ever Games, fought valiantly to stage a comeback in the fourth game, but that did not prove enough as the Spaniard rallied back to clinch the fifth game and the match in just 29 minutes.

Ankita looked totally out of sorts against a much higher ranked Sara (83) as she gave away some easy points and could not hold on to her serve on occasions.

The Siliguri girl, who booked her Olympic berth through a South Asian quota place earlier this year, however showed patches of brilliance as she tried her best to stay alive in the tournament.

Backhand has been Ankita's weak point and whenever Ramirez played there, the youngster was all at sea. She is also not known for her mobility and lack of feet movement also led to her downfall.

Ankita kept the Indian hopes alive winning the fourth game 11-8, but her abject surrender in the fifth and decisive game (11-2) proved fatal for her chances.

Ankita had earlier got a bye in the preliminary round.

Comments
Topics mentioned in this article
Table Tennis Olympics 2012 India
Get the latest Cricket news, check out the India cricket schedule, Cricket live score . Like us on Facebook or follow us on Twitter for more sports updates. You can also download the NDTV Cricket app for Android or iOS.