Sweden's Olympic team has appealed for women's triathlon runner-up Lisa Norden to get a gold medal after she lost in a photo finish. 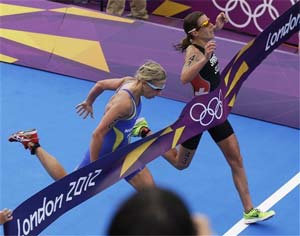 Sweden's Olympic team has appealed for women's triathlon runner-up Lisa Norden to get a gold medal after she lost in a photo finish.

The Court of Arbitration for Sport says Swedish officials have challenged the International Triathlon Union's decision to rank Nicola Spirig of Switzerland as the only winner. Both athletes were given the same time.

A Swedish appeal to triathlon's governing body was rejected on Wednesday.

CAS says the latest Swedish appeal argues that the "ITU did not comply with its own rules because it may not have taken into account the position of the athletes' torsos when establishing the medal positions."

CAS says a hearing will be held later on Friday. It aims to give a verdict by noon on Saturday.