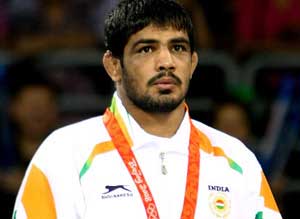 The coach and mentor of the two wrestlers, who has closely witnessed their progress to the top, said the wrestlers have gained a lot of experience since their Olympics debut in 2004 Athens and are determined to make the quadrennial event count.

"They have the experience of two Olympics behind them. Sushil and Yogeshwar have also been part and parcel of numerous World Championships, both of them are well aware of what would be at stake in London," Yashvir said.

"They are in great shape and I am hopeful that they will be able to extract the desired result."

Sushil has been shouldered the responsibility of leading the Indian contingent at the opening ceremony of the London Olympics and the wrestler will join his fellow grapplers in Minsk on July 28.

Asked whether the delay to join the camp in Belarus might hinder Sushil's training, Vinod Kumar replied in negative. "I don't think so. Sushil will anyway be practicing at the SAI centre in Sonepat, so I don't think that there will be any sort of break in his routine," Vinod said.

The chief coach, meanwhile, endorsed Yashvir's view that the duo stands a great chance at the Olympics.

"We want everyone of them to win a gold. But realistically, we are hopeful that couple of our wrestlers will finish on the podium. Sushil and Yogeshwar are experienced enough and we are pinning our hope on them," Vinod said.

Asked about the chances of young Amit Kumar and Narsingh Yadav at the marquee event, Vinod said, "It is not like that they are not good enough. They are very skillful but the only thing with them is that they don't possess the same amount experience which Sushil and Yogeshwar have."

"Amit finished with a bronze in the Asian Championship earlier this year. He could have easily finished at the top, but inexperience did him in. Otherwise both of them are quality wrestlers. With a bit of luck on their side they can produce unexpected results," he added.

Asked what will be their focus during the upcoming camp in Belarus, the chief coach said, "We are currently emphasising on practice bouts. We are making our wrestlers work keeping in mind the opponents they might face in the event."

Vinod also said that the issue surrounding the presence of a physio with the wrestling team at London has been sorted out.

"Arvinderpal Singh (physio) will be accompanying the team, we have sought the necessary permission. The only thing is that he will not be staying at the Olympic Village," he informed.

Comments
Topics mentioned in this article
Olympics 2012 Wrestling Sushil Kumar India Yogeshwar Dutt
Get the latest updates on IPL Auction 2023 and check out  IPL 2023 and Live Cricket Score. Like us on Facebook or follow us on Twitter for more sports updates. You can also download the NDTV Cricket app for Android or iOS.