While Shiva has been seeded fourth, Manoj got the number six billing in the mega-event which will start on Monday. 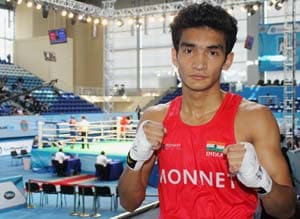 Asian champion Shiva Thapa (56kg) and Commonwealth Games gold-medallist Manoj Kumar (64kg) were the only ones to be seeded among the five Indian boxers, who were handed first-round byes in the draw for the World Championship held on Sunday in Almaty, Kazakhstan.

While Shiva has been seeded fourth, Manoj got the number six billing in the mega-event which will start on Monday.

Thokchom Nanao Singh (49kg), Olympian Sumit Sangwan (81kg) and Asian Games silver-medallist Manpreet Singh (91kg) are the other three boxers apart from Manoj and Shiva, who have been given byes in the first round.

Star boxer Vijender Singh (75kg), who was the first Indian to clinch a medal (a bronze in 2009) in the World Championships, had no such luck and will open his campaign against Sweden's Hampus Henriksson on October 17.

If he wins his opening bout, Vijender will find himself up against Ireland's Jason Quigley, the reigning European champion, who has been seeded fifth in the showpiece event.

On Tuesday, Vikash Malik (60kg) will go up against Meder Mamakeev of Kyrgyzstan. A day later Asian Championships silver-medallist Mandeep Jangra will step in for his first bout, against Selemani Kidunda of Tanzania.

Manpreet will start off against Keddy Agnes of Seychelles on October 18. Shiva will be in action the next day when he takes on the winner of the October 17 bout between Filipino Mario Fernandez and Guyana's Imran Khan.

Manoj will open on October 18 against the winner of the October 15 bout between Kenya's Denis Okoth and Turkey's Fatih Keles.

Nanao, a former cadet world champion, will be up against Scotland's Aqeel Ahmed on October 19 followed by Sumit, who will face ninth seed Petru Ciobanu of Moldova.

Due to the provisional suspension imposed on the Indian Boxing Federation, the country's pugilists would compete under the International Boxing Association's (AIBA) flag.

The Indians have won a total of two medals in the mega-event, which will feature more than 550 boxers from 116 countries this year.

After Vijender opened the account in 2009, Vikas Krishan had also won a bronze medal in the 2011 edition.

Comments
Topics mentioned in this article
Boxing Olympics 2012
Get the latest updates on ICC T20 Worldcup 2022 and CWG 2022 check out the Schedule, Live Score and Medals Tally. Like us on Facebook or follow us on Twitter for more sports updates. You can also download the NDTV Cricket app for Android or iOS.