Seven Indian athletes banned for a year for doping 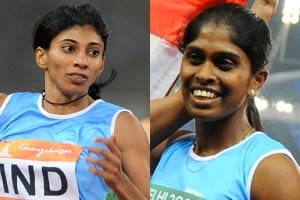 While the six women athletes have been banned for a year, Muraleedharan has been slapped with a two-year ban.

All of them can appeal against the bans to NADA appellate panel but their lawyers said they would assess the judgement before taking a decision on that.

NADA panel head Dinesh Dayal announced a reduced penalty period as the athletes were not found guilty of intentionally taking the banned substances.

The maximum suspension stands at two years for first-time violators.

"We find all the seven athletes guilty of doping violations under clause 2.1 of Anti-doping Rule. The date of suspension begins from today and any period under provisional suspension shall be credited in their penalty period which is one year," he told reporters.

"We did not find any significant fault on the part of these athletes on how the banned substance entered their bodies and they will get reduced penalty under clause 10.5.2 NADA rule. Two athletes - Mary Tiana Thomas and Jauna Murmu - were tested twice in May and June and they cannot be held guilty on two counts," he added.

In the submissions by NADA, it was found that foreign coach Yuri Ogorodnik was responsible for giving the banned substance to the athletes.

"It is the case of NADA that the admission of the athlete that they had taken supplement under the instructions of the coach does not absolve them of the legal obligations as enumerated in Article 2.1 and 2.1.1 & 2.1.2 of the Rules," the order further stated.

Akkunji, who won a gold in 400m hurdles and 4x400m relay in the Asian Games, will not be able to participate in the London Olympics as she will have to serve ban period upto July 3, 2012 as she was handed provisional suspension on July 4 this year.

A top Athletics Federation of India official said that Olympic qualification period ends on July 2 and the last qualifying event is scheduled for June 29 and 30, 2012.

"The last qualifying event is on June 29 and 30 and qualification period ends on July 2. They also will need a reinstatement test after their ban period is over which under IAAF will have to be thrice," the official said.

But the banned women athletes have a slim chance of making it to London if their replacements manage to qualify for the Games as the final say on who represents India in the event rests with the AFI.

NADA director general Rahul Bhatnagar said that under its rules, there will be only one reinstatement test.

"We will follow NADA rules and we will have only one test which can be done the next day after their ban period is over. The results should come within 48 hours," he said.

Mandeep, one of the members of the women's 4x400m relay quartet who won gold in Asian Games, was provisionally suspended on June 23 along with Murmu.

Jose, also a member of the quartet, and Mary Tiana Thomas were suspended on June 30. Priyanka Pawar was suspended along with Akkunji on July 4.

Meanwhile, the representative of the athletes, Anish Dayal, hailed the decision of the disciplinary committee, saying the stand vindicates their position.

"This reasoning by the disciplinary panel is pretty much in our favour. We are very happy prima facie. This order is definitely a vindication of the stand, which the girls were taking all through, that they were not at the fault," Dayal said.

He added that the NADA panel had confirmed that the athletes did not commit any intentional violation.

"The anti-doping disciplinary panel has found that period of ineligibility stands reduced because athletes have been found to have no significant fault or negligence," he revealed.

"The panel also found that contamination in their body was as a result of the pills given by the coach and those pills were found contaminated by the tests which were carried out by the NDTL (National Doping Test Laboratory)," he added.

Dayal said that since the athletes had to work at the behest of the SAI appointed coach they were not in a position to prevent themselves.

"As the coach was appointed by the SAI, athletes have no significant fault and they could not have prevented themselves from taking the pills.

"So under the NADA rules they have reduced the ineligibility period to one year starting from the date of the order but they have also given the benefit of the period of the provisional suspension. So for each girl it is largely from June-July 2011 till date. It means that they get six months of additional sentence," Dayal informed.

Comments
Topics mentioned in this article
Commonwealth Games 2010 India Cricket Team Olympics 2012 Athletics
Get the latest updates on IPL 2021, check out the IPL 2021 Schedule and Indian Premier League Live Score . Like us on Facebook or follow us on Twitter for more sports updates. You can also download the NDTV Cricket app for Android or iOS.