Sania Mirza to give up singles events to play in doubles

Winning an Olympic medal may remain an unfulfilled dream for Sania Mirza but the Indian tennis ace is not losing sleep over it and would continue to push her battle-hardened body to win one or two Grand Slam titles before ending her career. 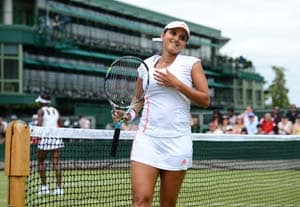 Winning an Olympic medal may remain an unfulfilled dream for Sania Mirza but the Indian tennis ace is not losing sleep over it and would continue to push her battle-hardened body to win one or two Grand Slam titles before ending her career.

A few things are certain to change in Sania's career, post Olympics as she will not be seen competing in the singles events on the WTA Tour from now on and doubles is all she will play.

Her Grand Slam winning mixed doubles combination with Mahesh Bhupathi is also under doubt since the two players have not spoken yet about continuing their partnership.

In a few days when the US Open begins in New York, we will get to know if Sania and Bhupathi will come together as team after their friendly relationship was hit by selection controversy ahead of Olympics.

Another motivation is to get back to top-10 in the ranking ladder and improve on her career-best rank of seven. We spoke to Sania about her future plans post Olympics. Excerpts from an interview:

Q. A defeat in the quarter-final at the London Games, albeit with good fight, must have left you heartbroken.

Sania:A defeat at any stage, whether in the first round or in the final of a major tournament, is always disappointing. But as sportsmen, we learn to pick ourselves up to bounce back and move on for the next challenge.

Q. You have medals from many multi-discipline events such as Asian Games, CWG, Afro-Asian Games but the kitty would be incomplete without an Olympic medal. Or you believe you can give it another try in Rio.

Sania:As someone who has taken immense pride in playing for the nation in whatever role I was asked to don, I am completely at peace with myself, knowing that I've given it my everything as far as the Olympics or other multi-discipline events are concerned.

I would have felt incomplete if I had never been a part of the Olympics, which to me is the ultimate experience of the spirit of brotherhood and camaraderie between all sportsmen of various countries of the world. I think there is a bit of destiny involved in winning. The greatest of them all, Roger Federer has never struck gold in singles in which he is the undisputed King of the game and that does not make him any lesser singles player. Neither has Pete Sampras ever won an Olympic medal.

Tennis players are very fortunate that unlike some disciplines of sport, in mega-sporting events like the Grand Slams, they have a huge platform to showcase their talents on the world stage once every few months.

Q. Olympics is a big dream of every athlete. What's your next target? What's the motivation to keep you going, pushing hard, day in and day out.

Sania:I have a passion for playing tennis and enjoy the workload and struggles of performing in this amazing global sport. I would like to improve my personal best ranking of seven in the world and try to win another Slam or two before I stop playing. One of the thrills of playing at the top tennis centres of the world is to see the Indian flag go up whenever I'm participating in these events. That's enough motivation for any Indian who has the opportunity to perform at these tournaments.

Q. Do you hope to play at the next Olympics in Brazil and try win a medal there?

Sania:Four years is too long a time in a tennis player's life to make any realistic assessment of chances.

Q. Leander Paes had said that while playing in your company he enjoyed the game a lot. How was your experience playing with him after two years gap.

Sania: Leander is a very seasoned doubles player and it was fun to play with him.

Q. Both of you played well together, do you still feel, you could have played better/won medal with Mahesh Bhupathi?

Sania: It's too late in the day to dwell on the 'ifs' and 'buts' and serves no purpose whatsoever!

Q. Will you continue to play with Bhupathi on Tour?

Sania:We haven't talked about it yet.

Q. Will you pair up with Bhupathi at the upcoming US Open?

Sania: As of now, it is not possible to give a firm reply.

Q. You know your body and fitness well. Do you think, it can still take the load of playing both singles and doubles on the Tour?

Sania: I have played very little singles since I got back after my third surgery in January and I still have too many aches and pains in my body. It's been 20 years since I started playing tennis and I've spent a decade playing singles and doubles professionally. I still enjoy singles and may play in an occasional tournament or at the Fed Cup if my country needs me. But I think the time has now come for me to completely shift my focus onto doubles.

Comments
Topics mentioned in this article
Tennis Olympics 2012 India Sania Mirza
Get the latest updates on ICC T20 Worldcup 2022 and CWG 2022 check out the Schedule, Live Score and Medals Tally. Like us on Facebook or follow us on Twitter for more sports updates. You can also download the NDTV Cricket app for Android or iOS.