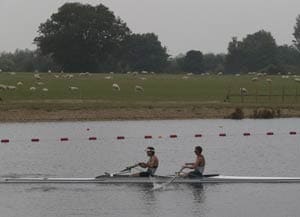 They crossed the line in of 6 minutes, 8.50 seconds at Dorney Lake. That easily surpassed the previous mark of 6:14.27 by Matthew Pinsent and James Cracknell of Britain in Seville, Spain, in 2002.

Murray and Bond have never lost since teaming the 2008 Beijing Olympics.

Comments
Topics mentioned in this article
Rowing Olympics 2012
Get the latest Cricket news, check out the India cricket schedule, Cricket live score . Like us on Facebook or follow us on Twitter for more sports updates. You can also download the NDTV Cricket app for Android or iOS.