The 23-year-old McIlroy, who is from Hollywood in Northern Ireland, would be eligible for selection by either Great Britain or Ireland at the 2016 Olympics in Rio de Janeiro when golf makes its Games debut. 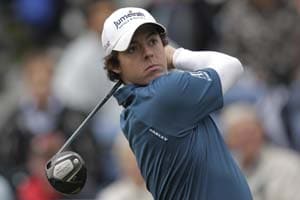 World number one Rory McIlroy admitted on Thursday that he may sit out the 2016 Olympics to avoid a storm over the sensitivities of playing for either Britain or Ireland.

The 23-year-old McIlroy, who is from Hollywood in Northern Ireland, would be eligible for selection by either Great Britain or Ireland at the 2016 Olympics in Rio de Janeiro when golf makes its Games debut.

But he told the BBC that he may skip the tournament as he does not want to offend either country.

"I just think being from where we're from, we're placed in a very difficult position," said McIlroy, the reigning USPGA champion.

"If I could and there was a Northern Irish team I'd play for Northern Ireland.

"Play for one side or the other - or not play at all because I may upset too many people. Those are my three options I'm considering very carefully."

McIlroy's tennis star girlfriend, Caroline Wozniacki, appears in the documentary, "Rory: Being Number One", and says that McIlroy's success has not gone to his head.

"People watch him play and win all these tournaments, but he hasn't changed a bit," said Wozniacki.

She added: "It's good that we both have our own separate careers.

"We know how the other is feeling and the drive to always want to improve at sport, but at the same time one of us isn't sitting at home waiting for the other."

Comments
Topics mentioned in this article
Golf Olympics 2012 Rory McIlroy
Get the latest updates on ICC T20 Worldcup 2022 and CWG 2022 check out the Schedule, Live Score and Medals Tally. Like us on Facebook or follow us on Twitter for more sports updates. You can also download the NDTV Cricket app for Android or iOS.