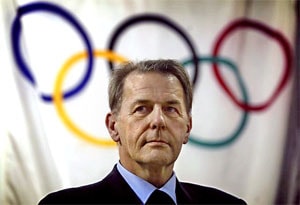 Rogge said the Britain team had been key in lifting the mood of fans in the host nation.

"There is the success of the home team which is always very important for the mood of the public, and our British friends are performing in an unbelievable way," Rogge said.

Britain's tally of 22 gold medals by early Wednesday afternoon is its best performance since London hosted the games in 1908. The home team trails only China and the United States in the medal standings.

"All in all I would say these are really very good games and I'm a very happy man," Rogge said.

Rogge said he received only positive feedback from the athletes village.

"I am residing as much as I can in the Olympic Village and the athletes are really ecstatic about the conditions in which they can live and they can perform and they can train," said the IOC leader, who competed in sailing for Belgium at each summer games from 1968 to 1976.

Rogge said he had attended 22 sports, and will go to the four remaining on his list before the Olympics end Sunday.

Comments
Topics mentioned in this article
Cricket Olympics 2012
Get the latest updates on ICC T20 Worldcup 2022 and CWG 2022 check out the Schedule, Live Score and Medals Tally. Like us on Facebook or follow us on Twitter for more sports updates. You can also download the NDTV Cricket app for Android or iOS.