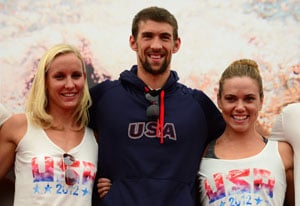 The US swimming superstar is emphatic in vowing his fourth Games will be his last. But with the start of competition at the London Aquatics Centre on Saturday fast approaching he was looking forward more than back.

"I feel more confident, my strokes actually feel like my strokes in the water," said Phelps, who has acknowledged paying the price for slacking off on his training after Beijing.

Even though he's not trying to match his Beijing feat, Phelps has some Olympic milestones in his sights, including a chance to surpass Soviet gymnast Larisa Latynina's Olympic career record of 18 medals.

"I've always tried really to not get caught up in that kind of thing," said Phelps, whose 16 medals include 14 gold. "I don't let it affect anything.

"I have my idea of what I think it'll take to win all the events."

He's slated to swim seven, including three relays. It's a daunting programme, but he said the intensity is nothing like pressure he and coach Bob Bowman experienced in Beijing.

"We've just been having fun," Phelps said. "We've just wanted to sit back and enjoy the ride, and we've been able to do that."

Even his vaunted rivalry with team-mate Ryan Lochte -- who will be trying to dethrone Phelps in the 200m and 400m individual medleys -- has a casual flip side.

The two often partner in the card games the US swimmers like to use to while away the time in the Olympic Village.

"Sure we do fire some words back and forth over the card games," Phelps said, but mostly they don't talk about swimming away from the pool.

"We both know if we're swimming so many events you have to put it away and move on."

Phelps will be up against Lochte right out of the gate in the 400m individual medley on Saturday. Phelps will also be defending Olympic titles in the 200m medley and the 100m and 200m butterfly.

The 400m medley is the race Phelps said he wouldn't swim again after Beijing, but there's no real secret to why he changed his mind, and why his London programme is so similar to his schedule of four years ago.

"We chose events we think I have the best chance to be successful at," he said.

Comments
Topics mentioned in this article
Swimming Olympics 2012
Get the latest updates on ICC T20 Worldcup 2022, check out the Schedule and Live Score. Like us on Facebook or follow us on Twitter for more sports updates. You can also download the NDTV Cricket app for Android or iOS.