Overshadowed by the Olympics and obscured by the Kevin Pietersen saga, England and South Africa resume their series at Lord's on Thursday with the top test ranking on the line. 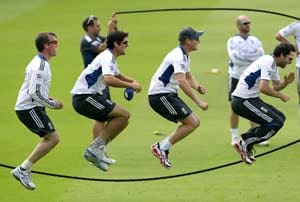 Overshadowed by the Olympics and obscured by the Kevin Pietersen saga, England and South Africa resume their series at Lord's on Thursday with the top test ranking on the line.

If South Africa can preserve or extend its 1-0 series lead it will replace the hosts at the top of the ICC test rankings.

"Some people say we are not sure about the rankings, do they hold any water?" South Africa coach Gary Kirsten said. "But deep down every team aspires to and would like to know that they are the No. 1 team in the world."

This wouldn't, however, be apparent judging by the headlines that dominated cricket over the past week.

The build-up to the test has been eclipsed by a fiasco centered on a man who won't even play in the match.

After South Africa routed England by an innings and 12 runs in the first test at The Oval, the series was only kept alive by an unexpectedly thrilling draw in the second test at Headingley last week, when Pietersen almost single-handedly dragged England back into the contest with a spectacular innings of 149.

Pietersen, a part-time spinner, then bowled out South Africa's top three to give England an outside chance of victory. But the spectacular achievement was almost immediately overshadowed when Pietersen suggested that the Lord's test might be his last at the post-match press conference, saying "it's difficult being me in the England dressing room."

The issues Pietersen cited seemed to have been resolved when he posted a faintly surreal video on YouTube on Saturday night, affirming his desire to play in all three formats of the game and revoking his retirement from one-day internationals.

Yet within 24 hours the ECB announced Pietersen had been dropped from the squad for Lord's, citing his failure to confirm he had not sent "derogatory" text messages to members of the South Africa team.

The precise nature of these messages was not disclosed. Reports in the British press suggested Pietersen had been critical of England captain Andrew Strauss and coach Andy Flower. The most serious accusation was that Pietersen had offered advice on how South Africa could get Strauss out, but this was dismissed by the Proteas' manager Mohammed Moosajee, who claimed the messages were nothing more than "banter between teammates."

Whether the messages were just banter remains to be confirmed, but Pietersen's behavior wasn't astute and it appears that he has a gift for irritating people. 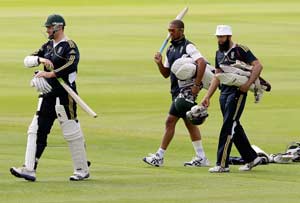 "Frankly, as players, all this has been a distraction we could well do without as we approach a massively important final match at Lord's," bowler James Anderson said. "Kevin talked about having issues within the dressing room. What's frustrating is that this was, literally, the first we knew about it. Kevin has mentioned nothing to us."

Yet being irritating isn't a crime. Pietersen hasn't been accused of spot-fixing, drug-taking or gambling, but England's selectors concluded that his actions were serious enough to exclude a player who, as Strauss pointed out at Headingley, can win a test match on his own.

Pietersen can be a frustrating player, as he was in throwing his wicket away in the first test when England was trying to save the match, but if England stick with the policy of playing six specialist batsmen, his replacement will be Jonny Bairstow, who was unconvincing in three tests against West Indies earlier this summer.

Bairstow averaged 12.66 against an attack far weaker than South Africa's and it isn't difficult to guess which batsman the Proteas would rather face.

South Africa bowling coach Allan Donald said Pietersen's innings at Headingley reminded him of Brian Lara while Dale Steyn, the top-ranked bowler, was visibly exasperated as Pietersen smashed him to all corners.

England will likely make another change to its line-up. Strauss admitted that excluding spinner Graeme Swann at Headingley was a mistake, meaning one of the seamers, probably Steven Finn or Stuart Broad, will make way.

Provided Alviro Petersen recovers from the hamstring problem he picked up at Headingley the Proteas, who drew their final tour match with Derbyshire on Monday, are likely to be unchanged.

Even without Pietersen, the test has the potential to be a classic. The cricket in the first two tests has been attritional at times, but the standard has been superb and the respect both sides have for each other is obvious. It's arguable that the real scandal is that this series will be over after just three matches.