Athlete Pinki Pramanik has hit out at the Bengal Police, asking why her sex determination report was leaked. She also wants help form the Sports Minister. 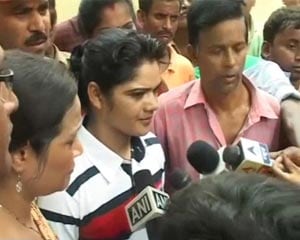 Pinki Pramanik, the medal-winning athlete at the centre of a rape and gender row after being declared to show some male characteristics, said today that West Bengal chief minister Mamata Banerjee should intervene and help her. She also wants the union sports ministry to assist. Ms Pramanik repeated the charge that the police was harassing her and "provoking" her to commit suicide.

Ms Pramanik was charged with raping her partner after a panel of doctors who examined her said that she showed male characteristics while being predominantly female. She has won all her medals competing in the women's category.

She was arrested earlier in June after the rape charge was brought against her by her partner Anamika Acharya and was bailed by court after spending two weeks in jail, when the judge declared she was incapable of rape. Medical tests conducted at that time to establish her gender were inconclusive, but a video of her undergoing the tests were surreptitiously released and she also accused police of groping her while taking her to court.

Today, she said that West Bengal chief minister Mamata Banerjee's silence on her humiliation had "hurt" her. She said that she would try and meet Ms Banerjee and present her case. "She should give attention to the case. She should intervene," Ms Pramanik said in Kolkata today. She also appealed to the Central sports minister to come to her assistance. "This whole episode is an insult to the government of India, for who I won the medals... I feel bad that my gender is being discussed in public. No athletes will come forward in Bengal," she said.

She again accused the police of harassing her to the brink of suicide. "I think they are provoking me to commit suicide," she said. "Police was always against me, they are mentally torturing me," Ms Pramanik said.

The case will be heard next on November 26.

Comments
Topics mentioned in this article
Athletics Olympics 2012
Get the latest Cricket news, check out the India cricket schedule, Cricket live score . Like us on Facebook or follow us on Twitter for more sports updates. You can also download the NDTV Cricket app for Android or iOS.