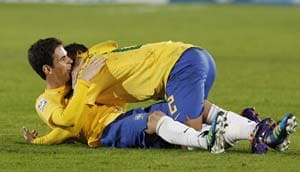 Neymar hit the bar and set up Brazil's second goal as next year's World Cup hosts completed their Asian mini-tour with a 2-0 win over Zambia in Beijing Tuesday.

Barcelona star Neymar, mercilessly harried before scoring the opener in Seoul, rattled the crossbar with a free-kick as he displayed his full range of skills for the Chinese crowd.

Chelsea midfielder Oscar got Brazil's first with a deflected shot from just outside the box which looped over the goalkeeper and into the corner of the net on 58 minutes.

Seven minutes later, Neymar chipped up a free-kick near the left by-line and Cruzeiro defender Dede headed in for 2-0 from six yards.

It was an efficient night's work for coach Luiz Felipe Scolari's five-time world champions, who could have scored more despite taking the opportunity to try out a number of fringe players.

Comments
Topics mentioned in this article
Bayern Munchen Chelsea Football Uruguay Brazil Olympics 2012
Get the latest updates on India vs South Africa and check out  Schedule, Results and Live Score. Like us on Facebook or follow us on Twitter for more sports updates. You can also download the NDTV Cricket app for Android or iOS.