For decades, Swiss Timing enjoyed a reputation for precision and professionalism at the world's biggest sports events, but a corruption case in India has it battling to save its image. 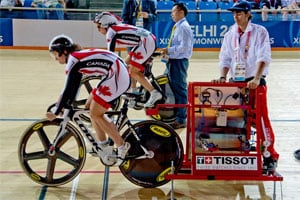 For decades, Swiss Timing enjoyed a reputation for precision and professionalism at the world's biggest sports events, but a corruption case in India has it battling to save its image.

The company, part of the Swatch luxury goods empire, has been an official time-keeper and results provider for the Olympics since 1976 and is already booked for London in 2012.

It and partner Omega, a watch brand in the Swatch stable, have successfully traded on the image of Swiss efficiency and luxury to create a near monopoly in the business.

But legal problems in India, where it is accused of conspiring to win a 1.1 billion rupee ($24 million) contract for the 2010 Delhi Commonwealth Games threatens to sully its previously squeaky clean reputation.

"What's happening in India is very damaging. It's decades of reputation that are ruined by allegations that we think are totally ungrounded," the company's chief executive Christophe Berthaud told AFP by telephone.

He has been called to stand trial in New Delhi, at a date yet to be set, over claims the company cheated the Indian state by corrupting officials to win the contract for the Commonwealth Games in New Delhi last year.

In a 36-page chargesheet filed in a special court in the capital and seen by AFP, the Indian Central Bureau of Investigation (CBI) accuses Swiss Timing and its partners of causing "a wrongful loss of 956 million rupees."

The loss "was caused to the organising committee and a corresponding gain to Swiss Timing and its partners and representatives by eliminating all competition as a result of conspiracy, forgery and abuse of position."

The chargesheet spotlights the dysfunctional organisation of the Delhi event -- the most expensive in Commonwealth Games history at $6 billion -- and the alleged collusion between officials and contractors.

Prosecutors allege that former Air Force pilot Kalmadi and others deliberately skewed the tender process in order to eliminate competitors to Swiss Timing and its local Indian partner of 25 years, Gem International.

Police also claim to have unearthed several suspected kickback payments from Gem, including one worth 7.1 million rupees to a company favoured by Kalmadi after the Commonwealth Youth Games in 2008.

In another transfer, the CBI claims Gem paid a company called AKR Constructions in the southern city of Hyderabad 112 million rupees to lay cables for the timing system at the Delhi Games.

Police say AKR had no experience in that field, produced bogus paperwork when probed by investigators, and was unable to identify the labour contractors it supposedly employed for the work.

A costing analysis conducted by experts concluded the work should have cost only 7.5 million rupees, the CBI says.

Berthaud, who has not been formally notified of the charges, says Swiss Timing has local partners across the world and Gem "looked after the part of things that have to be delivered locally."

When asked about the payments cited by the CBI, he said he "cannot speak on their behalf."

"We also did our own internal investigation to be sure because we are a very renowned company," he said, adding the company probe found "nothing wrong."

Both Gem partners charged in the case have absconded.

Swiss Timing was named only in March 2010, six months before the opening ceremony, leading to a far higher price for the organisers and performance problems throughout the October 3-14 event.

"They didn't have time to develop the software and test it properly," said a technology expert with knowledge of the Delhi event, who asked not to be named.

But he cautioned against jumping to conclusions about Swiss Timing's role in the alleged criminal conspiracy.

Police and a high-level committee formed by the government have calculated the losses caused by Swiss Timing by doing a crude comparison of its price with that of the only other competing bidder -- a Spanish company called MSL. "It's impossible to say what quality they would have provided without understanding the nature of their offering," the expert said of MSL, which has previously worked as a subcontractor at other sporting events but is untested as the primary provider.

Berthaud underlined that buying a timing and results service is like choosing a car. "You can get a car for 10,000 euros or half a million euros. There are big, big differences," he said.

The New Delhi court set to hear the case will determine whether their luxury service was won fairly.

Comments
Topics mentioned in this article
Roger Federer Hockey Olympics 2012 Other Sports
Get the latest updates on India vs Australia Series, check out the India vs Australia Schedule for 2020-21 and Ind vs Aus live score . Like us on Facebook or follow us on Twitter for more sports updates. You can also download the NDTV Cricket app for Android or iOS.