Australia's dismal showing at the Olympics will have consequences for the country's sports minister. 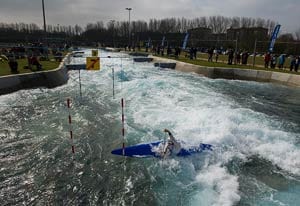 Australia's dismal showing at the Olympics will have consequences for the country's sports minister.

Former rower Kate Lundy will have to don British team kit while rowing on the London Games course after losing a bet with her British counterpart.

The wager with Hugh Robertson had been over which of the countries would claim the most medals at the London Olympics.

Although the games don't finish until Sunday, Lundy is already conceding defeat.

Had Britain fallen short, Robertson had promised to wear an Australian field hockey uniform and dribble a ball around Australia House, the country's official government residence in London.

Instead, Lundy will carry out her forfeit during the Aug. 29-Sept. 9 Paralympics, piloting a scull at Eton Dorney.

"I have cheerfully conceded," Lundy said. "I think Great Britain will be exceeding our tally in gold medals."

Britain has amassed 22 golds and 13 sets of both silver and bronze medals. Australia, though, has 5 golds, 12 silvers and 9 bronze.

"So many of our silver medals have been to British gold and we are learning fast what a millimeter or a millisecond feels like in Australia," Lundy said.

"So in some cases it's just bad luck, in other cases we do just need to sit back and take stock."

Lundy said Australian sports leaders will look to innovate their methods of coaching and unearthing talent.

Britain turned to Australia to transform its own Olympic fortunes. After winning just one gold medal in Atlanta, Britain collected 19 at the 2008 Beijing Games.

"(Australia) hosted the great games in Sydney and subsequently have taught the rest of the world a great deal and have provided through their Institute (of Sport) some remarkable coaches which we have been fortunate enough to benefit from across a number of sports," British Olympic Association chairman Colin Moynihan said.

So Moynihan isn't gloating about the downfall of Britain's fiercest sporting rival.

"Australia have had challenges, we all know that in the last 10 days," he said. "The respect, though, in the world of sport for Australia stands still exceptionally high."

Comments
Topics mentioned in this article
Andy Murray Tennis Australia Cricket Team Olympics 2012
Get the latest updates on IPL 2020, check out the IPL Schedule for 2020 and Indian Premier League (IPL) Cricket live score . Like us on Facebook or follow us on Twitter for more sports updates. You can also download the NDTV Cricket app for Android or iOS.