Olympics: Obama praises US athletes, is 'jealous' Michelle in London

US President Barack Obama has paid tribute to American sportspersons participating in the London Olympics and Paralympics for their hard work and sacrifice. 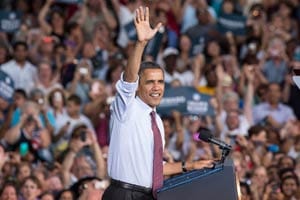 US President Barack Obama has paid tribute to American sportspersons participating in the London Olympics and Paralympics for their hard work and sacrifice.

"We could not be prouder of the men and women representing our country in London, in both the Olympics and in the Paralympics," Xinhua quoted him as saying in a radio address Saturday.

He said that he has watched the Olympic contests on swimming, women's soccer, and the women's gymnastics in which the US team recaptured the team gold. So far the US tops the chart with 24 gold medals, only one ahead of China.

"It's not the medal count alone that inspires us -- most of our athletes won't claim a medal at all. It's the character of the men and women who compete for those medals. It's their hard work and sacrifice ... It's their dogged perseverance and unyielding determination, through disappointment and triumph alike," Obama said.

The president praised the American Olympians for displaying the "American spirit", which means "if we work hard, we can achieve our dreams".

Obama said he was "a little jealous" of his wife, First Lady Michelle, who led the American delegation to London for the Olympic opening ceremony July 27.

Comments
Topics mentioned in this article
Serena Williams Olympics 2012 Lewis Hamilton Manchester City Slovenia Kevin Stadler
Get the latest Cricket news, check out the India cricket schedule, Cricket live score . Like us on Facebook or follow us on Twitter for more sports updates. You can also download the NDTV Cricket app for Android or iOS.