China's Peng Shuai said the Olympic tennis tournament will be much more exciting than the regular Wimbledon as it is a one-off special with national pride at stake. 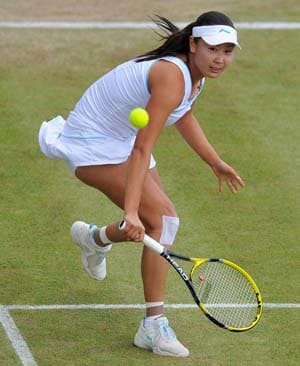 China's Peng Shuai said the Olympic tennis tournament will be much more exciting than the regular Wimbledon as it is a one-off special with national pride at stake.

Peng will be back at the All England Club later this month preparing to play her part in the London 2012 Games.

The national number three is looking forward to transforming a large house in the plush Wimbledon area into the headquarters for China's Olympic tennis dreams.

Peng said the thought of competing in an event that comes around once every four years was more gripping than regular majors, which come once a month this time of year.

It's more exciting and it's also more pressure because it's not like a regular tournament," she told AFP.

"But this one is different and it's on grass rather than hard courts, so you never know what could happen."

Wimbledon is in southwest London, right across the British capital from the Olympic Park in Stratford, east London, meaning the Chinese tennis party could be holed up together in the quiet, genteel district rather than spread about in the Olympic Village.

And that is just the way world number 34 Peng would like it.

"Maybe we will stay in Wimbledon village because the Olympic Park could be an hour and a half away. So because we will play singles and doubles I think they will rent a house and everybody will stay in the village -- it's closer," she said.

Peng, Zheng Jie and Li Na are all in the Olympic women's singles draw.

Peng and Zheng will team up for the doubles, while Li will compete alongside Zhang Shuai.

But she believes she will be in better shape come the Olympics, which officially open on July 27.

Peng said entered Wimbledon without much practice due to a hand injury sustained at the French Open.

"But after three or four matches in singles and doubles I'm more into the grass again," the 26-year-old said.

She is weighing up whether to play at Stanford in California before the Olympics or go back to China and rest.

Peng may take advantage of some new grass courts in her homeland before the Olympic squad heads to London.

"I will get a lot of practice so I will have much more confidence in the grass," she said.

China topped the medal table at the Beijing 2008 Games and needs to match the achievement this time around to prove it has truly come of age on the Olympic stage.

Peng is hoping to do her bit to boost China's medal tally.

"This time in London, I have no idea how many golds we can get but I know for gymnastics, badminton and ping-pong we are really strong so I hope the whole Chinese team will do well," she said.

"I wish I can do well with my doubles partner and in the singles I will try my best."

Comments
Topics mentioned in this article
Tennis Wimbledon 2012 French Open 2011 Francesca Schiavone Sania Mirza Shuai Peng Marion Bartoli Olympics 2012
Get the latest updates on IPL 2020, check out the IPL Schedule for 2020 and Indian Premier League (IPL) Cricket live score . Like us on Facebook or follow us on Twitter for more sports updates. You can also download the NDTV Cricket app for Android or iOS.