Defending champions China were eclipsed by hosts Great Britain as they suffered a poor first day in the Olympic men's team gymnastics competition on Saturday. 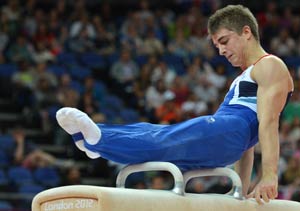 Defending champions China were eclipsed by hosts Great Britain as they suffered a poor first day in the Olympic men's team gymnastics competition on Saturday.

Two Chinese men slipped off the pommel horse and one of them fell on his face in the floor routine as China, dominant in front of their own fans at Beijing 2008, finished with 269.985 points to Britain's 272.420.

Britain are now poised to qualify for their first final since 1924. France produced the third-best display of the session, with two sessions to follow later on Saturday.

China were exceptionally disappointing on the pommel horse, with Guo Weiyang and Zhang Chenglong both falling, while Zou Kai also failed to convince.

Guo, a late replacement for the injured Teng Haibin, also produced an unconvincing floor display, with a clumsy fall in his final tumble contributing to a score of 12.266.

"One of the gymnasts is a substitute, and he made quite a few mistakes due to a lack of experience," said Chen Yibing of team-mate Guo's display.

"We think that we should beat Britain, but because of the substitute and various other things, we didn't perform as we should have."

Zou saved face with a floor routine that earned him a mark of 15.833, but his 15.533 on the high bar left the defending Olympic champion unsure of a place in the final on his preferred piece of apparatus.

Britain were solid throughout, and saw Kristian Thomas and Daniel Purvis top the individual all-around standings ahead of France's Cyril Tommasone.

"I knew that if I got through my routine I'd break down, because it's been such an emotional four years," he said.

"China have lost one of their gymnasts and obviously didn't have a great competition, but we really stress the point that, as a team, we shouldn't worry about what other people are doing."

On the reaction of the crowd, he said: "It was magical, it really was. When they announced us and the crowd erupted, it blew your socks off."

Qualification for the eight-team final continues on Saturday, with attention likely to focus on men's individual all-around favourite Kohei Uchimura of Japan.

Comments
Topics mentioned in this article
Gymnastics Andy Murray Tennis Olympics 2012
Get the latest Cricket news, check out the India cricket schedule, Cricket live score . Like us on Facebook or follow us on Twitter for more sports updates. You can also download the NDTV Cricket app for Android or iOS.