Pakistani Olympians voiced anger and disappointment on Wednesday after their once-dominant hockey team failed spectacularly at the London Games, calling for change from top to bottom. 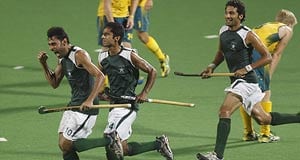 Pakistani Olympians voiced anger and disappointment on Wednesday after their once-dominant hockey team failed spectacularly at the London Games, calling for change from top to bottom.

Pakistan were annihilated 7-0 by world champions Australia in their last pool match on Tuesday -- their worst Olympic defeat -- to crash out of the medal race.

They now play South Korea in a play-off for seventh and eighth position on Thursday.

Former Olympian Shahnaz Shaikh said changes were needed at all levels of the game to get the country back to the form that saw Pakistan win hockey gold in 1960, 1968 and 1984.

"First, the Dutch coach Michel van den Heuvel was shown the door and then there was an uncertain build-up for the games, which affected the performance," Shaikh told AFP.

"When a kid continuously fails monthly tests, how can he get good marks in the annual examination?" lamented Shaikh, demanding immediate changes within a "directionless" PHF.

"We need new planning and new faces to run the game, which was pumped with huge funds from the government in the past," said Shaikh, referring to state subsidies, the value of which was not disclosed, for hockey between 2004-2010.

"Enough is enough, we badly need a change in the PHF," said Ahmed, a member of Pakistan's last of four World Cup winning teams in 1994.

"We should have prepared well for the Olympics but we were exposed by a superior Australian team. It is time we make concrete efforts to lift up our national sport."

The last two decades have seen a dramatic decline for Pakistan hockey.

London is their fifth Olympics without a medal. Their last was a bronze at the 1992 Games in Barcelona.

Comments
Topics mentioned in this article
Hockey Olympics 2012
Get the latest updates on India vs South Africa and check out  Schedule, Results and Live Score. Like us on Facebook or follow us on Twitter for more sports updates. You can also download the NDTV Cricket app for Android or iOS.