Liu Xiang's glittering career could be over after his Olympic dream was shattered again, Chinese official media declared on Wednesday, as a specially created web page drew 28 million messages of support. 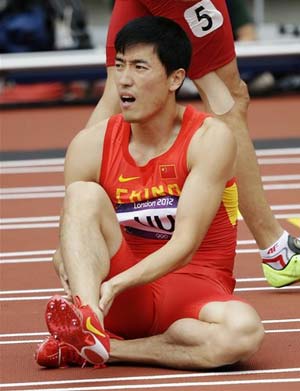 Liu Xiang's glittering career could be over after his Olympic dream was shattered again, Chinese official media declared on Wednesday, as a specially created web page drew 28 million messages of support.

Almost all China's main newspapers splashed front-page images of the devastated 29-year-old after he crashed into the first barrier in his opening heat of the 110-metre hurdles in London on Tuesday.

Many said he would likely be forced into early retirement after reportedly damaging his Achilles tendon -- the same injury that saw him abandon his bid for gold in Beijing in 2008 in similarly dramatic circumstances.

Liu is one of China's biggest sporting heroes after he became the first Chinese to win an Olympic track gold, in Athens, eight years ago. He is also a former world champion.

The People's Daily -- China's most widely distributed paper -- declared: "The Liu Xiang era is over".

"Liu successfully became this first Asian athlete to challenge Western athletes on the track," said an article in the overseas edition of the paper.

"Liu's retirement is almost a certainty" the Beijing News said in a headline, while state broadcaster CCTV said that the race "could be Liu's final competition."

Television commentator Yang Jian sobbed as Liu limped out of the London Games. "Now he is 29 and maybe he should take a break. This is the worst result I could have imagined," said Yang.

Addressing Liu's future, China's athletics team leader Feng Shuyong told the Xinhua news agency late on Tuesday: "It's hard to say. Lots of athletes get injured and come back. It depends on many factors.

"I hope all the fans can understand this and that anything can happen. It happens to many athletes."

While tens of millions of Chinese expressed their sympathy online, some web users voiced suspicions that their hero might have fallen deliberately, fearing his performance would not live up to fans' massive expectations.

"Liu Xiang is a fake, he fell on purpose," posted one user of Sina Weibo, an equivalent to Twitter, under the name Xianshujinnan. "If you want to learn how to fall, learn from Liu Xiang," posted another.

More than half a million respondents to an online poll on one popular web portal also said it was "surprising" that Liu should suffer exactly the same fate at two Olympic Games.

The South China Morning Post -- a Hong Kong daily -- said China's propaganda authorities had ordered its media to avoid negative coverage of Liu, and there was no such criticism in China's press.

Chinese celebrities using Sina Weibo were also quick to send commiserations to Liu. "You're still a hero to me." wrote Yao Chen, an actress with more than 23 million followers -- making her the most popular microblogger in China.

Chinese swimmer Sun Yang, who scooped gold in the 1,500-metre freestyle in London, posted on his microblog that Liu was "worthy of respect" for his ongoing battle with injury.

"Let's not make such a big fuss about gold medals," he wrote.