For skeptics, the Olympics were deliciously doomed: London's transport network would surely fail, Britain's athletes would flop, rain would prevail and terrorists would strike. But then the sun came out after months of sodden skies, vehicles moved briskly, there were no attacks and British athletes reeled in a shocking 65 medals. 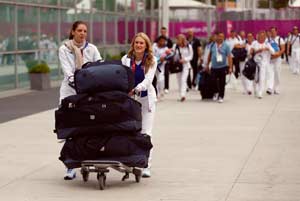 For skeptics, the Olympics were deliciously doomed: London's transport network would surely fail, Britain's athletes would flop, rain would prevail and terrorists would strike. But then the sun came out after months of sodden skies, vehicles moved briskly, there were no attacks and British athletes reeled in a shocking 65 medals.

On Monday, as international athletes and visitors poured out of London and the city's 8 million residents resumed their normal lives, British officials hailed the 2012 Olympics as an unqualified success. Even the naysayers predicting doom and gloom had to eat their words.

"I was moaning like everyone else before the games, thinking the roads would be packed and nothing would work," said London shopkeeper Yvette Tracton, 28. "But it's been brilliant."

Some 116,000 people were leaving Monday from Heathrow airport, London's busiest hub, compared with 95,000 for a typical August day. Gatwick Airport was handling 70,000 departing passengers, 15 percent more than usual. Airports had come under scrutiny in the months leading up to the Olympics for lacking the staff to deal with backlogs of people and luggage, but Monday's crowds moved through without a hitch.

The exodus included thousands of athletes and Prime Minister David Cameron, who was heading on vacation to the Mediterranean.

Heathrow built a temporary Olympics terminal with 31 check-in desks to accommodate departing athletes and support staff. The terminal was decorated like a park, and some staff wore bearskin hats in the style of Buckingham Palace guards.

"I have to say to Britain, you guys did a great job," said passenger Tumua Anae, a 23-year-old Californian who won gold as part of the U.S. water polo team.

London's quirky mayor, Boris Johnson, gloated to reporters, saying London had defied the skeptics. Some 300,000 foreigners and 5.5 million day-trippers flocked to the city for the games. Hotel occupancy was at 84 percent - double what Beijing and Sydney saw during their Olympics.

Johnson said the city's public transport had coped just fine. Use of London's subway - the Tube - was up 30 percent but saw few major problems. London's overground commuter train saw double the normal crowds, and the city's bike hire scheme broke a record with 46,000 bikes rented on a single day.

Traffic actually became heavier on Monday as motorists who had stayed away to avoid Olympic crowds returned to the streets. Taxi drivers breathed a sigh of relief after having complained of fewer customers and being barred from using special Olympic road lanes. 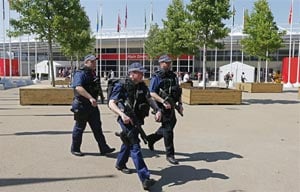 Security officials, too, could cheer the lack of any major incident during the games.

Britain has been a prime target of Islamic terror groups because of its support for the U.S.-led operations in Afghanistan and Iraq. Dozens of plots, including the 2006 attempt to blow up trans-Atlantic airliners, have been hatched within Britain's sizeable Muslim population.

Upping the fear factor was an Olympic security contractor's admission just weeks before the games that it would have a shortfall of guards. In the end, the military had to provide 3,500 last-minute personnel, and contractor G4S expects to lose up to 50 million pounds ($78 million).

But while police made some 250 arrests, there were no attacks - something officials attributed to years of planning and boosted intelligence resources.

"I'm very proud that we didn't have anything serious to deal with, but that was because of a lot of hard work done by a lot of people," said Olympics security coordinator Chris Allison.

In central London, workers using fork lifts, cherry pickers and small cranes began clearing a temporary 15,000-seat arena - and scooping up 5,000 tons of sand - from the site of the beach volleyball competition in Horseguards Parade, a storied square in the heart of London's Westminster political district.

A total of 17 Olympic venues around the country will eventually be dismantled. But some will remain for the upcoming Paralympics, which run from Aug. 29 to Sept. 9.

The Olympic Park, visited by more than 5 million people during the games, will be closed to the public until the Paralympics, and many venues will see changes to make them more accessible to the disabled before those games begin. Some 7,000 police officers and 5,000 G4S workers will be on hand to guard the Paralympics.

Until then, London can bask in the memories of an event when went very much as intended.

Carmelina Moscato, a member of the bronze-medal Canadian soccer team, said participating in the games was like "being in dreamland."

"I could not have asked for more," she said.