An Australian woman has admitted taking the ashes of her late father - an Olympic silver medallist - trackside to the London Games and scattering them over the triple jump run-up. 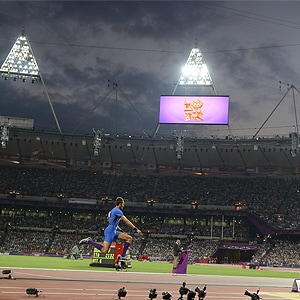 An Australian woman has admitted taking the ashes of her late father - an Olympic silver medallist - trackside to the London Games and scattering them over the triple jump run-up.

Robyn Glynn told Sydney radio that her father George Avery, who died in 2006, had wanted to attend the London Olympics because it was where he won second place in the triple jump, then known as the hop, step and jump, in 1948.

So the family booked tickets for the triple jump final, and took his remains along.

"We decided in 2000 that we were going to bring my father back here but unfortunately he passed away a few years ago," she told ABC radio.

"So my sister and myself, and our husbands, and my daughter and our grandchildren came over with his ashes. And we brought him here tonight (Thursday) and he's here with us as we watch the triple jump anyway."

Glynn then admitted that the family had taken things a little further.

"Actually, we did more than sneak him in, we snuck ourselves down to the edge of the track and in the breeze we let his ashes go and they went right over the triple jump run-up," she said, in a call from the London stadium where she had just witnessed Usain Bolt win the 200m.

Glynn said her father never made a major fuss of his Olympic success and had kept his medal in a drawer, but after attending the Sydney Games in 2000 had decided he wanted to revisit London.

"We decided that this is where he would have wanted to come back to," she said. "He really wanted to be here but he didn't quite make it."

Avery was a contender for the gold at the 1948 London Games after consistent jumping in the preliminary rounds, but he finished second in the final by just four centimetres.

Comments
Topics mentioned in this article
Olympics 2012 Australia Cricket Team Australian Grand Prix
Get the latest updates on ICC T20 Worldcup 2022 and CWG 2022 check out the Schedule, Live Score and Medals Tally. Like us on Facebook or follow us on Twitter for more sports updates. You can also download the NDTV Cricket app for Android or iOS.