Olympics a platform to do well in Asian Games: Ullalmath

Aware that only a miracle will hand him a medal at the Olympics, India's lone participant in swimming, Gagan Ullalmath sees his London Games exposure as a platform to do well in the 2014 Asian Games. 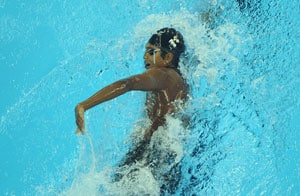 Aware that only a miracle will hand him a medal at the Olympics, India's lone participant in swimming, Gagan Ullalmath sees his London Games exposure as a platform to do well in the 2014 Asian Games.

Ullalmath said he does not want to be over ambitious but at the same time is determined to give his best and better his personal best of 15:59.33 that had earned him a silver at the Asian age group championship in Jakarta last year.

"I know it's a big field. But I'm not nervous. No matter what, I will give my best and hope to make the best use of the exposure. It's a huge leap and not realistic to reach to the level of the top Olympic swimmers so soon," Ullalmath said.

"I would be really happy if I go under 15:20 before the 2014 Asian Games to give a shot at the top three finish at Incheon (South Korea)," he said.

"We lack in physique but with good exposure we are improving. It's not the same what it used to be five years ago. I hope we will be up there among the top countries in 8-10 years time," he added.

The 20-year-old from Bangalore got a surprise entry to the Olympics when he was given a berth under 'Universality' quota in the men's 1500m freestyle event. His best timing though does not even figure in the top 300 of the latest FINA rankings in men's 1500m freestyle.

For Ullalmath, who gave up Engineering to pursue swimming, it's a dream come true as he is looking forward to meet his idols -- the US duo of Michael Phelps and Ryan Lochte.

Comments
Topics mentioned in this article
Swimming Olympics 2012 India
Get the latest updates on Fifa Worldcup 2022 and check out  Fifa World Cup Schedule, Stats and Live Cricket Score. Like us on Facebook or follow us on Twitter for more sports updates. You can also download the NDTV Cricket app for Android or iOS.