Olympic players from Haryana to get over Rs 6.5 crore

While four out of the six Indian medal winners at the recent London Olympics, with a Haryana connection, will get Rs.4.5 crore for their achievements, others who could not get any medal also need not lose hope, officials here said on Thursday. 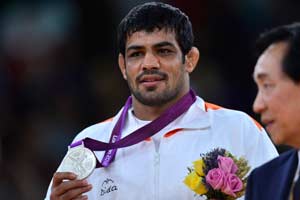 While four out of the six Indian medal winners at the recent London Olympics, with a Haryana connection, will get Rs.4.5 crore for their achievements, others who could not get any medal also need not lose hope, officials here said on Thursday.

"Four out of the six medal winners are from Haryana or associated with the state," an official said.

The Haryana government announced that it will hold a state-level function at Bhainswal Kalan village in Sonipat district Aug 26 to honour all players from the state or having any connection with it with cash rewards.

While Dutt will get Rs.one crore from the Haryana government for his feat, three other Indian medallists, who have some Haryana connection, are also being rewarded by the state government.

Delhi-based wrestler Sushil Kumar, who won a silver medal, will be given Rs.1.5 crore. Hyderabad-based players Saina Nehwal (badminton) and Gagan Narang (shooting) will also get Rs.one crore each for their bronze medals.

Haryana Chief Minister Bhupinder Singh Hooda will honour the medal winners and participants of London Olympics at a function to be organised at Chaudhary Matu Ram sports complex at Bhainswal Kalan village.

The coaches of medal winners will also be honoured, a state government spokesman said here.

Discus thrower Krishna Poonia, who made it to the finals of her event in London, will get Rs.31 lakh for the achievement even though she failed to get a medal. Poonia, who hails from Haryana, is now married and settled in Rajasthan.

Wrestler Geeta Phogat, who became the first Indian woman wrestler to qualify for the Olympics, will get a reward of Rs.21 lakh. Boxer Vijender Singh and wrestler Amit Kumar, who made it to the quarterfinals of their respective events, will also get Rs.21 lakh each, the official added.

Comments
Topics mentioned in this article
Olympics 2012 Yogeshwar Dutt Sushil Kumar India Saina Nehwal
Get the latest updates on ICC T20 Worldcup 2022 and CWG 2022 check out the Schedule, Live Score and Medals Tally. Like us on Facebook or follow us on Twitter for more sports updates. You can also download the NDTV Cricket app for Android or iOS.