In the 2004 World Cup in Bangkok, Rathore had tested positive for the 'A' sample, but the International Shooting Sport Federation (ISSF) cleared him after the double-trap ace returned negative for his 'B' sample. 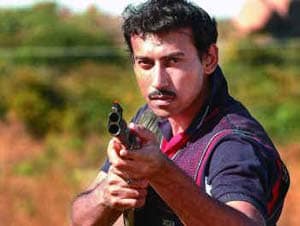 Olympic silver medallist Rajyavardhan Singh Rathore found himself at the centre of controversy on Wednesday with his name being dragged into a failed dope test that was conduced before the Athens Games way back in 2004.

In the 2004 World Cup in Bangkok, Rathore had tested positive for the 'A' sample, but the International Shooting Sport Federation (ISSF) cleared him after the double-trap ace returned negative for his 'B' sample.

The surfacing of the issue after a gap of nine years has surprised Rathore, who felt it was the handiwork of the National Rifle Association of India (NRAI) whose April 6 elections were declared null and void by the Delhi High Court last month.

NRAI challenged the decision of the single judge who had allowed the plea of Rathore that the election was a 'sham and be quashed' as he was denied an opportunity to contest.

"These events are a clear attempt to defame me and divert attention from the High Court's decision of nullifying the NRAI elections. To rake up a non issue from 9 years earlier is vendetta and a last ditch attempt to protect the stranglehold over the NRAI," Rathore said in a statement.

"In 2004 the highest officials of the ISSF were absolutely convinced about my credibility and had cleared me. I am amazed at the resistance of a few NRAI officials to allow free and fair elections. These things won't stop like-minded athletes from trying to clean up Indian sports," the 43-year-old Colonel added.

Claiming that Rathore's allegations were baseless, NRAI President Raninder Singh said that the body was with Rathore in 2004 and continues to support him even now.

"This is baseless. All I can say is that we are always with the athletes. We were with him back in 2004 and we are with him now," Raninder said.

Raninder expressed surprise at the sudden surfacing of a nine-year old issue.

"What is the relevance of all this? It was the international body which has exonerated him then. How has the ISSF let him off I can answer nothing about it.

"We have stringent anti-doping commitments."

Raninder rubbished Rathore's claims that this was a ploy to "deviate" the attention ahead of the Delhi HC's May 30 ruling.

"Why should I deviate from this? We have to listen to court, we will go according to the court of law. There had been two verdicts -- one has come in our favour, and one in his by a single bench. We have filed an appeal to the double bench," Raninder said.

The NRAI had filed an appeal in the Delhi HC after the court declared the shooting body's elections as null and void.

The procedure adopted for electing four representatives as life members on March 4, and April 6 NRAI polls, had been challenged by Rathore.

Taking note of Rathore's plea, the court had said that denying him the right to contest elections was not justified, which prompted the NRAI to take legal discourse.

Comments
Topics mentioned in this article
Olympics 2012 Shooting Jaspal Singh Other Sports
Get the latest updates on ICC T20 Worldcup 2022 and CWG 2022 check out the Schedule, Live Score and Medals Tally. Like us on Facebook or follow us on Twitter for more sports updates. You can also download the NDTV Cricket app for Android or iOS.