Nothing to lose at the Olympics, says boxer Jai Bhagwan

A late bloomer in the world of boxing, Jai Bhagwan took rapid strides to get to the pinnacle of sport in the country. In his first appearance at the Olympics, the 27-year-old feels he has nothing to lose and will be under no pressure. 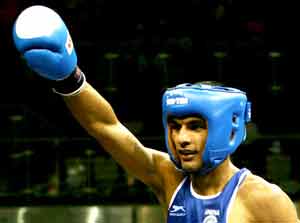 A late bloomer in the world of boxing, Jai Bhagwan took rapid strides to get to the pinnacle of sport in the country. In his first appearance at the Olympics, the 27-year-old feels he has nothing to lose and will be under no pressure.

Bhagwan waited eight years to represent India, having missed the 2004 Athens and 2008 Beijing Games. He finally fulfilled his dream at the World Championships last year when he reached the quarter-finals in the 65 kg division and qualified for the London Olympics.

"Before every big bout, I go on thinking that I have nothing to lose. If I win then it's great, I get all the accolades. I put 110 percent in every fight and never think I can lose," Bhagwan told IANS before leaving for London.

Bhagwan, a two-time Asian Championships medallist and a bronze winner at the Delhi Commonwealth Games, is confident of putting up a good show and bringing home a medal.

"My expectations are to get back home with a medal and I'm very confident I can achieve the goal," said Bhagwan, who will be member of the eight-strong Indian boxing squad.

"I have trained extremely hard. I tend to gain weight quickly and to stay in the weight limit I have had to work out a lot and make sure I don't overeat."

Jai Bhagwan's mother, too, is confident that her son will make the country proud and said she always knew he was destined for great things.

"I knew he would take to boxing when he was very young. He has always been a strong boy, he never had much inclination towards studies, so we let him do what he wanted to," she said.

"He is very hardworking and he is focused on anything he does," she added.

Bhagwan felt that boxing had been for long neglected with people preferring to follow cricket, but in his view the Beijing Games, where Vijender Singh gave India its first medal in boxing, has brought about change.

"Boxing is very underrated, no one cared about the sport before the Beijing Olympics. Everywhere you see only cricket. If channels show boxing, then people will see that as well," said Bhagwan.

Comments
Topics mentioned in this article
Olympics 2012 India Boxing
Get the latest updates on ICC T20 Worldcup 2022 and CWG 2022 check out the Schedule, Live Score and Medals Tally. Like us on Facebook or follow us on Twitter for more sports updates. You can also download the NDTV Cricket app for Android or iOS.