No medal but this was our best Olympic performance: Sandhu

India's much-hyped male boxers might have drawn a blank in the London Olympics but national coach Gurbaksh Singh Sandhu on Thursday insisted that the country's pugilists gave their "best performance" in the quadrennial sporting spectacle. 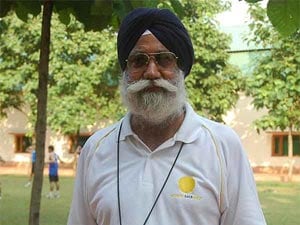 India's much-hyped male boxers might have drawn a blank in the London Olympics but national coach Gurbaksh Singh Sandhu on Thursday insisted that the country's pugilists gave their "best performance" in the quadrennial sporting spectacle.

"We have fought brilliantly but have been denied a medal. We were unable to translate good performances into a medal. However, it does not take away the fact that the boys gave an excellent account of themselves," Sandhu told PTI from London at the end of the seven-strong men's campaign.

This was the biggest-ever boxing team to qualify from India for the Olympics. They were touted as strong medal contenders but all the seven, including Beijing Olympics bronze-medallist Vijender Singh (75kg), bowed out by the quarterfinal stage in London.

It was left to the sole woman representative, M C Mary Kom (51kg), to get a bronze for Indian boxing.

The Indians fell victim to some controversial officiating during the Games, marred by inconsistent scoring and refereeing.

To start with, the country's appeal against the close opening-round loss of Sumit Sangwan (81kg) was rejected.

The Indians took the matter to Court of Arbitration through a preliminary email, but after getting legal advice they decided to drop the matter.

Next up, Manoj Kumar (64kg) lost a hard-fought contest to home favourite Thomas Stalker and cried "cheating, cheating, cheating". The Commonwealth Games gold-medallist was defeated despite seemingly dominating the bout and was also hard-done by refereeing as his rival was not warned for what appeared to be excessive bending.

Comments
Topics mentioned in this article
Olympics 2012 India Boxing
Get the latest updates on ICC T20 Worldcup 2022 and CWG 2022 check out the Schedule, Live Score and Medals Tally. Like us on Facebook or follow us on Twitter for more sports updates. You can also download the NDTV Cricket app for Android or iOS.