Algerian 14-year-old Lea Moutoussamy will make history in London when she becomes the youngest fencer in Olympic history. 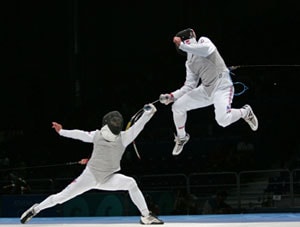 Algerian 14-year-old Lea Moutoussamy will make history in London when she becomes the youngest fencer in Olympic history.

The sabre specialist booked her place at the Games by winning the Africa zone qualifying tournament, beating an opponent 17 years her senior.

Although born in Paris, the French-Algerian began representing Algeria in September 2011.

Moutoussamy is one of the youngest competitors at the Games, but she is 15 months older than swimmer Adzo Kpossi from Togo, who, at 13, is the youngest athlete due to compete in London.