Most popular and unpopular men of London Olympics

While Usain Bolt is probably the most popular man in the world this week, Ashley Gill was a fraction away from making himself the most unpopular man on the planet. 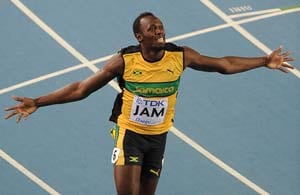 While Usain Bolt is probably the most popular man in the world this week, Ashley Gill was a fraction away from making himself the most unpopular man on the planet.

And why is that, one may ask, along with: And who is Andy Gill? Gill was the man who threw a bottle on the track just behind the blocks as Bolt and company began their historic 100 metres race on Sunday, Xinhua reports.

Bolt said he heard nothing of the incident, but imagine if the bottle had hit the fastest man in the world, it would have been a disaster of Olympic proportions.

Gill, who was said to be drunk at the time, was quickly arrested and dragged out of the stadium. He was also unlucky with that he was sitting next to a certain Edith Bosch. Bosch had won a bronze medal in judo earlier in the week and clearly didn't mess around.

"A drunken man threw a bottle on the track, I have beaten him," she tweeted afterwards in an act that Sebastian Coe, the president of the Organizing Committee of the London Olympics, referred to as "poetic justice," and probably painful justice as well.

There is one big question that has to be answered: given the incredibly high price of beer in the stadium, how could Mr Gill afford to get drunk?

Bolt didn't waste much time celebrating his win, posting a photo of himself with three Swedish women handball players on his 'Twitter' site at 3am. Remember this is a man who also has to run the 4X100 metres and also the 200m later in the week, but as the saying goes, 'If you are looking to meet the perfect woman, it's better to interview them two at a time,' or in Bolt's case three.

Meanwhile (and this in no way is to imply that Bolt has done anything untoward), police in London have seized thousands of condoms bearing the Olympic logo in an operation against counterfeit memorabilia.

The police commented that counterfeit goods are not built to standard and more likely to fail, so you have been warned.