Nineteen - say that again, nineteen - Olympic medals. All won by one man unlike any other. It simply defies belief. Imagine the space that much heavy metal takes up. Even more unimaginable is the effort it took to get them. 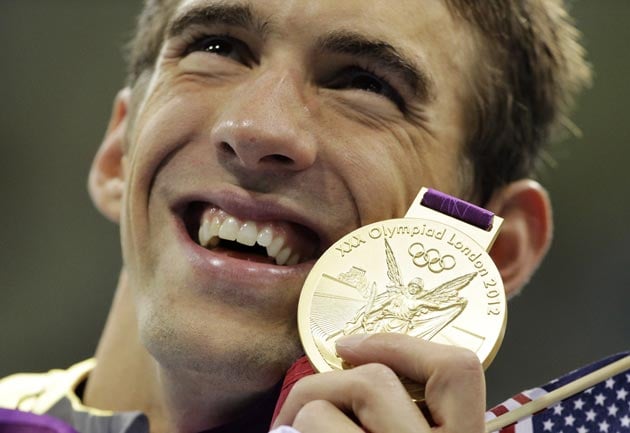 London: Nineteen - say that again, nineteen - Olympic medals. All won by one man unlike any other. It simply defies belief. Imagine the space that much heavy metal takes up. Even more unimaginable is the effort it took to get them.

No one could disagree with the bedsheet unfurled by fans in the crowd that said: "PHELPS GREATEST OLYMPIAN EVER."

So thank you, Michael. Thanks for another milestone in human history. The simple words "Olympic record" didn't quite do justice to the achievement, which Phelps sealed and delivered in London, but which really was a monument to a lifetime of dedication to the goal of being the best one can be.

Sounds so simple. It's anything but.

For the first time in all of the hundreds of races he has swum, Michael Phelps said he smiled to himself underwater in the last 20 meters of the 4x200-meter freestyle relay on Tuesday night that got him the medal - it was gold, yet another one - he needed to become the first Olympian in history with 19 medals.

"It shows that hard work does pay off," he said.

Trying to understand what it must feel like to be Phelps is beyond us. But those words of wisdom - seemingly so obvious, but so hard to actually execute - we could grasp.

Fifteen golds, two silvers and two bronze accumulated at three Olympics and - who knows? - perhaps as many as three medals more to come in London before the most successful swimmer ever gets on with the rest of his life, seeing for himself that there is more to the world than pools and hotel rooms.

Please, for his sake, no.

The best of his 27 years bathed in chlorine.

God knows how many thousands of miles in the pool, how many cold morning swims growing up in Baltimore.

Resting on the laurels of 2008 in Beijing, where he eclipsed Mark Spitz's record with eight golds at one games, and staying on the golf course would have been so much easier than beating himself back into shape for London.

Phelps tried that. Kind of liked it for a while, too, packing on pounds and avoiding water.

But then he found the discipline and desire to mount one last Olympic campaign. Not as immaculately prepared as in 2008, but still good enough to get the three medals in London he needed to break the Olympic record of 18 - nine golds, five silvers and four bronzes - that Soviet gymnast Larisa Latynina put together from 1956-64.

The first - the first silver of his career - came Sunday in the 4x100 freestyle relay, when the French got gold and payback for 2008, when the roles were reversed.

The second medal that drew Phelps level with Latynina was on Tuesday night in the 200 butterfly. The great competitor was furious that it was, quote-unquote, only a silver again.

Exactly an hour after tossing away his swim cap in disgust at that loss to Chad le Clos of South Africa, Phelps returned composed for the U.S. team's relay victory that put him on an Olympic pedestal alone.

The jaded will say he backed into Latynina's record, that Phelps winning one gold and two silvers so far in London is disappointing by his standards.

But he still had to get to London to put himself in a position to win them. That was a giant achievement when a life of lazy luxury could have been the tempting alternative. One that 99.9 percent of us would have chosen.

And, once here, Phelps still had to beat swimmers who since Beijing worked to get better to beat him. If anything, the mortality he showed in London only put his pure gold Great Haul of China into sharper perspective. It was truly epic. And epics can't come every time, even from Phelps. Otherwise, they wouldn't be epic.

"I thought the golds just used to come easy," said Bob Bowman, the coach who steered, yelled and shaped the hyperactive kid into a world-beater.

"It underscores how difficult it is to win a medal of any color at this event, and it's getting harder and harder."

So Phelps is a history-maker, has been since he was a teen. And with the years, the history grew only bigger.

But history's best athlete ever?

People will say so. They'll point to the medals, the world records, the memorable swims in Athens, Beijing and now London that more often than not ended with the playing of the "The Star-Spangled Banner."

But there have been so many fabulous Olympians that to single out one, even one as unique as Phelps, suggests the others weren't so great in their own way.

Jesse Owens, Carl Lewis and the indefatigable Paavo Nurmi, who won the 1,500 meters, caught his breath and then lined up 55 minutes later to win the 5,000 all on one day in 1924.

They were all pretty great.

So, too, was George Eyser, the American gymnast who won three golds, two silvers and one bronze at the 1904 Olympics with a wooden left leg, which replaced the one amputated after he was run over by a train.

Or Lis Hartel, the Danish rider who despite being paralyzed by polio below the knees and having to be helped on and off her horse, Jubilee, won silver in dressage in 1952 and again in 1956.

And on and on.

You get the picture.

There's a whole human history born from the games.

Phelps is part of it, but not all of it.

But because he came back and completed the job in London that he started in Athens, he is a bigger part of that history than most.

"This has been an amazing ride," he said.

Comments
Topics mentioned in this article
Swimming Olympics 2012
Get the latest updates on IPL 2021, check out the IPL 2021 Schedule and Indian Premier League Live Score . Like us on Facebook or follow us on Twitter for more sports updates. You can also download the NDTV Cricket app for Android or iOS.