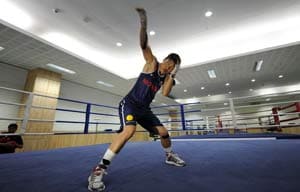 "I am very happy and extend thanks to all the people of the country for supporting me in the Olympics," the 29-year-old ace boxer said after receiving the cheque.

"Soon I'll start preparing for the next Olympic in Brazil in 2016," the five-time world champion said.

Along with her, another Manipuri Olympian boxer L Devendra Singh was given a cheque of Rs 20 lakh by the chief minister at Khuman Lampak stadium in the state capital.

Earlier, both the boxers were given a rousing reception by hundreds of people at their arrival. Both were taken around the city in an open roof and decorated vehicle before the felicitation function.

Comments
Topics mentioned in this article
Boxing Olympics 2012 India Cricket Team
Get the latest updates on ICC T20 Worldcup 2022 and CWG 2022 check out the Schedule, Live Score and Medals Tally. Like us on Facebook or follow us on Twitter for more sports updates. You can also download the NDTV Cricket app for Android or iOS.