With boxer M C Mary Kom poised to fight for silver medal in the London Olympics on Wednesday evening, a large number of people in Manipur prayed for her success in temples and churches all over the state. 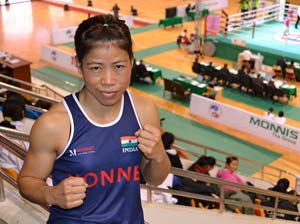 With boxer M C Mary Kom poised to fight for silver medal in the London Olympics on Wednesday evening, a large number of people in Manipur prayed for her success in temples and churches all over the state.

Many supporters walked through the streets of the capital and elsewhere with placards in hand and praying for her and Devendro Singh's success in the 49kg class quarterfinal bout.

"I will pray to God at the temple before and after the game of Mary Kom," said her first boxing coach Ibomcha Singh, expressing confidence that Mary would do well in the remaining two bouts.

Singh said Mary appeared to be tense in the beginning of her fights, but got back her nerves thereafter.

Reports from some parts of the state said sports lovers and supporters of the two boxers prayed before temples and churches by offering flowers.

"Let us pray for her golden victory," he said and declared that the government would soon announce the amount of money to be awarded to the successful state players at the Olympics.

While Mary will meet Nicola Adams of Great Britain in the semifinals, Devendro will fight against Paddy Barnes of Ireland.

Different civil society groups, including students' bodies, have appealed to the state electricity department to supply uninterrupted power during the matches of the two boxers.

Family members of Mary Kom in Imphal said they watched television when she was fighting in the earlier bouts.

Mary, who will soon be promoted to the rank of additional superintendent of police in the Manipur police department, hails from interior Churachandpur district.