With New Zealand unexpectedly leading Australia in the Olympics medal table, Kiwi media are mocking their trans-Tasman rivals' modest success so far at the London Games. 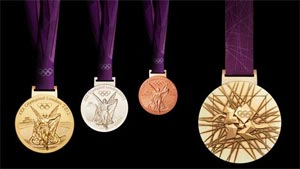 With New Zealand unexpectedly leading Australia in the Olympics medal table, Kiwi media are mocking their trans-Tasman rivals' modest success so far at the London Games.

But at the end of competition on day nine New Zealand's three golds put it 14th in the medal table, 10 places above Australia, which had a single gold after its vaunted swimming team failed to fire at the Olympic aquatic centre.

"Hey Aussies, we want to draw your disordered attention to a little line item on the Olympic Games gold medal table," the article said.

"We're talking about the line that seems to have been censored in Australian newspapers. The one that puts New Zealand ahead of Australia, the self-styled world's greatest sporting nation."

It urged New Zealanders to "enjoy the moment while it lasts".

The Herald on Sunday said "Oz's dark cloud has a silver fern", referring to New Zealand's national symbol, declaring: "They (Australia) claim to be green and gold, now they're just green with envy."

A cartoon in the New Zealand Herald showed an Olympic official warning there was a chance Australia could miss out on its usual medal, depicting him holding a giant gold gong marked "for insufferable cockiness".

Comments
Topics mentioned in this article
Olympics 2012
Get the latest updates on India vs South Africa and check out  Schedule, Results and Live Score. Like us on Facebook or follow us on Twitter for more sports updates. You can also download the NDTV Cricket app for Android or iOS.