With a little British pomp and a lot of British pop, London brought the curtain down on a glorious Olympic Games on Sunday in a spectacular, technicolor pageant of landmarks, lightshows and lots of fun. 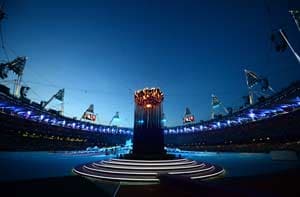 With a little British pomp and a lot of British pop, London brought the curtain down on a glorious Olympic Games on Sunday in a spectacular, technicolor pageant of landmarks, lightshows and lots of fun.

It was all delivered in a psychedelic mashup that had 80,000 fans at Olympic Stadium stomping, cheering and singing along. Organizers estimated 300 million or more were watching around the world.

The fun, festive and fast-moving show opened with pop bands Madness, Pet Shop Boys and One Direction, not to mention a shout-out to Winston Churchill and the Union Jack.

There were also monochrome recreations of London landmarks covered in newsprint, from Big Ben's clocktower and Tower Bridge to the London Eye ferris wheel and the chubby highrise known as the Gherkin.

It all spread out across an Olympic Stadium floor arranged to resemble the British flag.

Street percussion group Stomp built the noise into a frenzy, and dancers brandished brooms, in a nod to the spontaneous popular movement to clean up London after riots shook neighborhoods not far from Olympic Stadium just a year ago.

And there was more to come.

The Who, the surviving members of Queen and the Spice Girls were expected to take the stage during the three-hour paean to British pop, and to the country's triumphant turn hosting the games.

Prince William's wife, Kate, and Prince Harry took seats next to Jacques Rogge, the president of the International Olympic Committee. They sang along to "God Save the Queen."

But perhaps the best seats in the house were for the 10,800 athletes, who marched in as one, rather than with their nations, symbolizing the harmony and friendship inspired by the games.

As the crowd cheered, their heroes and flashbulbs rippled through the stadium, the Olympians cheered back, some carrying national flags, others snapping photographs with smartphones and cameras.

They held hands, embraced and carried each other on their shoulders, finally forming a human mosh pit on the field. 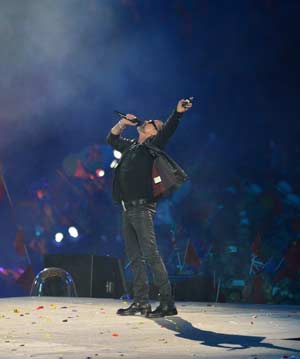 The ceremony had something for everyone, from tween girls to 1960s hippies. The face of John Lennon appeared on the stadium floor, assembled by 101 fragments of sculpture, and just as quickly gave way to George Michael.

Muse, Fatboy Slim, and Annie Lennox were all expected to perform. Queen Elizabeth II, who made a memorable mock parachute entrance at the July 27 opening ceremony, was expected to be on hand.

Eight minutes were turned over to Brazil, host of the 2016 Games in Rio de Janeiro, which promises an explosion of samba, sequins and Latin cool. Following tradition, the mayor of London was to hand the Olympic flag off to his Rio counterpart.

There were also to be speeches by Rogge and London organizing committee chief Sebastian Coe, and the extinguishing of the Olympic flame.

What a way to end a games far more successful than many Londoners expected. Security woes were overcome, and traffic nightmares never materialized. The weather held up, more or less, and British athletes overachieved.

It all came at a price tag of $14 billion, three times the original estimate. But nobody wanted to spoil the fun with such mundane concerns, at least not on this night.

Britons, who had fretted for weeks that the games would become a fiasco, were buoyed by their biggest medal haul since 1908 - 29 golds and 65 medals in all.

The United States edged China in both the gold medal and total medal standings, eclipsing its best performance at an Olympics on foreign soil after the Dream Team narrowly held off Spain in basketball for the country's 46th gold.

"It's been an incredible fortnight," said Coe, an Olympic champion in his own right.

While the games may have lacked some of the drama and grandeur of the Beijing Olympics in 2008, there were many unforgettable moments.

Jamaican sprinter Usain Bolt became an Olympic legend by repeating as champion in both the 100-meter and 200-meter sprints. Michael Phelps ended his long career as the most decorated Olympian in history.

British distance runner Mo Farah became a national treasure by sweeping the 5,000- and 10,000-meter races, and favorite daughter Jessica Ennis became a global phenomenon with her victory in the heptathlon.

Female athletes took center stage in a way they never had before. American gymnast Gabby Douglas soared to gold, the U.S. women's football team made a dramatic march to the championship. Packed houses turned out to watch the new event of women's boxing. And women competed for Saudi Arabia, Qatar and Brunei for the first time.

And then there was Oscar Pistorius, the double-amputee from South Africa running on carbon-fiber blades, who didn't win a medal but nonetheless left a champion. And sprinter Manteo Mitchell, who completed his leg of the 4x400 relay semifinal on a broken leg, allowing his team to qualify and win silver. 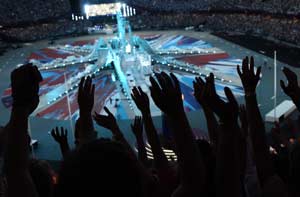 "It was a dream for a sports-lover like me," Rogge said of the two weeks of competition.

Coe said the closing ceremony didn't aim to be profound, not even the irreverent romp through British history offered by Danny Boyle's $42 million spectacle on opening night.

The theme for the close, Coe said, could be summed up in three words. "Party. Party. Party."

London organizers tried to keep the ceremony under wraps, but photographs of their rehearsals, in an old car plant in east London, made the British papers almost daily.

The show was to include performances of 30 British hit singles from the past five decades - whittled by Gavin from a list of 1,000 songs.

Gavin said Saturday the show have a soundtrack ranging from late Edward Elgar, composer of the "Pomp and Circumstance" march, to The Kinks' "Waterloo Sunset." Frontman Ray Davies performed the 1960s song, a love letter to London.

While creators of the opening ceremony could rehearse for weeks inside the stadium, Gavin and his team had less than a day between the end of track and field competition and Sunday's ceremony before 80,000 people.

Even as spectators filed in early Sunday evening, performers did final run-throughs, including actor-comedian Russell Brand in a top hat aboard a psychedelic magical mystery tour bus. Jets of steam shot up from the stage as dancers in warmup clothes shimmied and shook.

Britons seemed exhausted and exhilarated after two glorious weeks in the world's spotlight, and just months after the country celebrated the queen's 60th year on the throne with a magnificent pageant and street parties.

"I was a bit worried we wouldn't be able to live up to it," said Phil Akrill of Chichester. "But walking around here it's just unbelievable."

Even non-Brits were proud of their adopted homeland.

"It's just been a really nice thing to see," said Anja Ekelof, a Swede who now lives in Scotland. "The whole country has come together."


Comments
Topics mentioned in this article
Olympics 2012
Get the latest updates on India vs South Africa and check out  Schedule, Results and Live Score. Like us on Facebook or follow us on Twitter for more sports updates. You can also download the NDTV Cricket app for Android or iOS.