British favourite Alistair Brownlee shattered pre-race warnings of plots to stop him as he stormed to victory in the Olympic triathlon on Tuesday, with his younger brother Jonny finishing third. 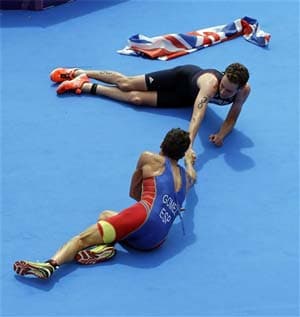 British favourite Alistair Brownlee shattered pre-race warnings of plots to stop him as he stormed to victory in the Olympic triathlon on Tuesday, with his younger brother Jonny finishing third.

Spain's Javier Gomez, a two-time world champion, split the British brothers as he finished second, 11 seconds off the winner, after the 1.5km swim, 43km bike-ride and 10km run at London's scenic Hyde Park.

The Brownlees' rivals had formed alliances aimed at breaking their dominance but Alistair, 24, was among the leaders from the outset and he seized gold with a blistering run around the park's Serpentine lake.

Alistair Brownlee clocked 1hr 45min 25 secs for the race while his brother, forced to serve a time penalty for mounting his bike too early, held on to third as he finished 31 seconds behind.

The elder of the Brownlees, who grew up fell-running and cycling in their hilly home county of Yorkshire, had time to grab a Union Flag and stroll across the line before collapsing to the deck in celebration.

With huge crowds on the banks of the Serpentine, Slovakia's Richard Varga got them off to a fast start in the swim as he stretched out the field, followed by Gomez and the Brownlees.

Varga, completing the 1.5km lap in 16min 55sec, was first onto the bikes with Gomez, the Brownlees and Italy's Alessandro Fabian forming a breakaway group which quickly opened up a 20-second gap on the chasing pack.

Behind the leaders, the bike race lasted just seconds for double-medallist Simon Whitfield, the inaugural Olympic champion in 2000, as he hit the deck in an early collision with Costa Rica's Leonardo Chacon and withdrew.

After two passes of Buckingham Palace on the historic, seven-lap bike circuit, the front-runners had been caught and the Brownlees' team-mate Stuart Hayes led a fast lead group of about 30 riders.

The Brownlees were among the first runners through the transition from bikes to the foot race and they set off at a furious pace, followed by Gomez, on the first of four laps around the Serpentine.

Their 17-second gap after lap one extended to 27 seconds by the start of lap three, and Alistair turned on the pace to lead Gomez by five seconds heading into the final circuit.

His brother, forced to serve a 15-second penalty for mounting his bike too early, emerged still ahead of France's Laurent Vidal heading into the last dash around the Serpentine.

But there was never any doubt about the winner and Alistair Brownlee milked the applause from a packed grandstand as he slowly crossed the finish line, sparking celebrations among the giant crowd estimated at 200,000.

Comments
Topics mentioned in this article
Triathlon Olympics 2012
Get the latest updates on ICC T20 Worldcup 2022 and CWG 2022 check out the Schedule, Live Score and Medals Tally. Like us on Facebook or follow us on Twitter for more sports updates. You can also download the NDTV Cricket app for Android or iOS.