At the London Olympics, Adele is served with tennis, Beyonce bounces around the basketball court and Queen's "We Will Rock You" spikes up beach volleyball. 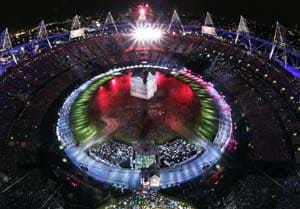 At the London Olympics, Adele is served with tennis, Beyonce bounces around the basketball court and Queen's We Will Rock You spikes up beach volleyball.

A walk around Olympic Park is a non-stop musical mystery tour - all part of a boisterous music policy that aims to keep spectators pumped up.

Songs waft from speakers mounted on poles and from buskers dotted around the park. Half-heard snatches of music mix with the booming roar of the crowds coming from venues.

The music is inescapable - but for visitors and staff, mostly welcome.

"It's kind of 'down with the kids' music," said volunteer Olympic worker Anna Letts, standing outside the main stadium. "Poppy, modern - no old songs.

Music drove the British Invasion in the 1960s and Cool Britannia in the 1990s, and it's key to the way the island nation is projecting itself through these games. Assembling a suitably Olympian soundtrack has been a crucial, complex task.

Director Danny Boyle's opening ceremony was packed with choice British cuts, from The Kinks to the Sex Pistols to Dizzee Rascal. Sunday's closing ceremony promises "a symphony of British music," with live performances by acts including The Who.

For games venues, organisers have a list of 2012 songs - as in London 2012 - arranged into playlists to suit the mood. The music is predominantly British, but includes global stars like U2, Jay-Z and Britney Spears.

"Heritage" sports like tennis, rowing and equestrian get a suitably "classic" soundtrack - classic, in this case, encompassing Adele, The Rolling Stones and orchestral Led Zeppelin.

Surprise live acts, including Pixie Lott and the Pet Shop Boys, have been popping up to play at Wimbledon and other venues.

"Extreme" sports such as boxing and BMX cycling get "high octane" accompaniment - think Foo Fighters - while "Energetic" sports such as swimming and basketball are scored to "upbeat, dance and urban" music.

At basketball games, some songs are deployed to get the crowd singing - Wonderwallby Oasis is popular - while others provide a dash of humour. The lopsided score at the U.S.-Nigeria game drew a burst of Duffy'sMercy, while spills have been rewarded with a blast of Chumbawumba's "Tubthumping:" ''I get knocked down, but I get up again."

Beach volleyball has become one of the most popular events of the games, due in part to its cheeky razzmatazz atmosphere, which includes pompom girls and a barrage of upbeat tunes, from Wake Me Up Before You Go-Goto My Sharona. Sand-raking between the matches acquires a slapstick air thanks to the "Benny Hill" theme tune.

Prime Minister David Cameron, whose 10 Downing St. residence is just yards from the beach volleyball sandpit, has reportedly joked he was being kept awake by the ceaseless thump of We Will Rock You.

A few have complained that pounding soundtracks are distracting from the competition.

The Daily Telegraphcriticised what it the "deafening pop and techno music" played on the first night of Olympic track and field competition. Its sports writer Paul Kelso said blasting loud dance music during the women's 10,000-meter final had been "disgraceful disrespect ... horribly, unforgivably misjudged."

Paul Deighton, chief executive of the London Olympic organising committee, conceded that "we did tone it down a bit" after that first night, but insisted the musical selection was popular with everyone but purists.

"There are people of course who would prefer complete silence and focus and concentration on the athletes," he acknowledged.

"I think it adds something," said Claire Wilkinson, coming out of synchronised swimming at the aquatic center. "It's really upbeat, good, well-known songs. Happy songs."

Three songs have been impossible to escape at these games. "Heroes" by David Bowie has been adopted as the British team's anthem. "Gold" by Spandau Ballet is the BBC's song of choice for medal-winners. And Vangelis' theme from "Chariots of Fire" is played loudly and often in all sorts of venues.

But the act that gets the most negative reaction is - sacrilege! - The Beatles. Some volunteers have been heard grousing about how much of the Fab Four's music is being played in the park.

Others joke about how often Paul McCartney has popped up at the games - playing the opening ceremony, turning up for cycling and track competitions, leading the inevitable audience sing-alongs of "Hey Jude" and "All You Need Is Love."

It has led some to suggest the 68-year-old musical icon dial it down.

Comments
Topics mentioned in this article
Olympia Olympics 2012
Get the latest updates on ICC T20 Worldcup 2022 and CWG 2022 check out the Schedule, Live Score and Medals Tally. Like us on Facebook or follow us on Twitter for more sports updates. You can also download the NDTV Cricket app for Android or iOS.