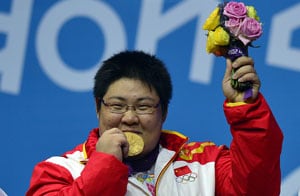 She also matched South Korean Jang Mi-Ran's world marker of 187kg in the clean and jerk.

And in a stunning competition European champion Tatiana Kashirina of Russia set a new snatch world record of 151kg as she missed out on gold by just one kilo.

Hripsime Khurshudyan of Armenia claimed bronze with a total lift of 294kg.

The competition boiled down to a straight shoot-out between Zhou and the woman she deposed as world champion last year, Kashirina.

The Russian drew first blood as she twice improved on her own world record in the snatch, taking it from 148kg to 151kg.

She lifted 5kg more than Zhou in that section, meaning the Chinese athlete needed to pull something out of the bag in the clean and jerk in order to claim gold.

And as she weighs almost 30kg more than Kashirina, she needed to surpass the Russian's total rather than match it or she would have lost out on bodyweight.

From the beginning she put the pressure on Kashirina by lifting 6kg more in her first effort.

That forced Kashirina to match her weights to avoid needing to make two lifts in a row.

Having started with 175kg, she matched Zhou's 181kg with her second lift but when the Chinese heaved 187kg over her head, Kashirina simply could not live with her.

Zhou had one more lift to come but failed with her attempt at 190kg.

Behind the top two, Beijing champion Jang found herself in a battle for bronze with Khurshudyan, in no small part due to Maryam Usman of Nigeria, who was third after the snatch, failing to register any lift in the clean and jerk, three times finding 160kg beyond her means.

Khurshudyan had lifted 3kg more than Jang in the snatch and after lifting 166kg in the clean and jerk, the Korean would have needed to hoist 170kg to take bronze.

The four-time world champion could not manage it and Armenia had their first medal of the competition.

Comments
Topics mentioned in this article
Weightlifting Olympics 2012
Get the latest updates on IPL 2020, check out the IPL Schedule for 2020 and Indian Premier League (IPL) Cricket live score . Like us on Facebook or follow us on Twitter for more sports updates. You can also download the NDTV Cricket app for Android or iOS.