India's Geeta Phogat insisted she would continue her wrestling career after losing both her bouts in the women's 55kg freestyle category at the London Olympics on Thursday. 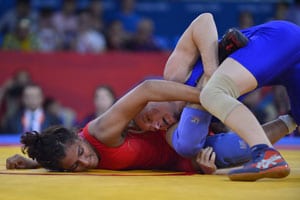 India's Geeta Phogat insisted she would continue her wrestling career after losing both her bouts in the women's 55kg freestyle category at the London Olympics on Thursday.

The 23-year-old from Balali in Haryana, the 2010 Commowealth Games champion, was beaten by finalist Tonya Verbeek of Canada, a two-time Olympic medallist in her opening bout and was later defeated in her repechage contest by Ukrainian Tetyana Lazareva.

Phogat, the first female wrestler to represent India at an Olympic Games, said: "I need more international exposure and then I will be ready.

"I come from a village where traditionally girls don't go out and play sport so I struggled a lot to come this far and to get to this position where I am at the Olympics.

"Today everyone in my village recognises me. I am very proud to be here and I am hoping to be at the next Olympics (in Rio in 2016).

Reflecting on her clash with Verbeek, she said: "On my first match to the Canadian, I failed to take the clinch and score. That was my mistake."

As for the clash with Lazareva, she added: "I was down in the first round so I had to take a lot of risk in the second round against the Ukrainian girl. I am not unhappy with the performance."

Comments
Topics mentioned in this article
Wrestling Olympics 2012 India
Get the latest updates on ICC T20 Worldcup 2022 and CWG 2022 check out the Schedule, Live Score and Medals Tally. Like us on Facebook or follow us on Twitter for more sports updates. You can also download the NDTV Cricket app for Android or iOS.