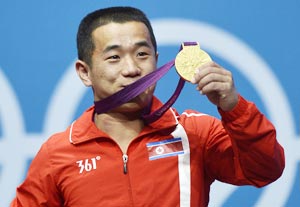 Om, in a tactical move to put pressure on China's two-time world champion Wu Jingbiao in the -56kg, surprisingly opted to join the morning's B group yesterday -- usually for lifters hoisting lesser weights than the afternoon's A group.

And the switch worked wonders as Wu, lifting in the later session, was unable to match Om's combined total of 293kg, which included an Olympic record of 168kg in the clean and jerk.

"There are no secrets. The reason for my improvement and how I won the gold medal is down to the warm love of the Great Leader Kim Jong-Il and the Great Comrade Kim Jong-Un."

"I think my tactic worked 100 percent! But I watched the evening session with a lot of nervousness."

After fluffing his first snatch, Wu put any concerns to bed with classy second and third lifts, snatching 130kg and then 133kg without even shuffling his feet on the wooden platform.

Only Tunisian Khalil El Maoui stuck with Wu, managing a best of 132kg, with the next closest rivals 5kg further adrift.

Wu struggled on his first clean and jerk, losing his grip as he rolled the barbell up to his shoulders.

The Chinese lifter then heard over the public address that El Maoui had had to withdraw, and promptly hoisted 156kg to leave himself 4kg off Om.

With the final lift of the session, Wu strode onto the stage at a packed ExCeL arena.

After quickly chalking his hands, he made a polite bow to roars from the crowd.

Momentarily shutting his eyes, Wu hoisted what would have been the gold medal-winning barbell. Sitting across his chest, the bar wobbled, and Wu staggered forward.

He seemed to right himself but then the bar slipped and the Chinese lifter tumbled backwards, agony etched all over his face as Om rose up from the stands where he had been watching the action, punching the air in delight.

"I'm not satisfied with the result," Wu said. "Of course, I didn't expect Om to post such a good result. You're always prepared for a dark horse to emerge, but not from group 'B'."