London 2012 Volleyball: Russia will play for the gold in men's

Russia will play for the Olympic gold medal in men's volleyball after defeating Bulgaria 3-1 on Friday. 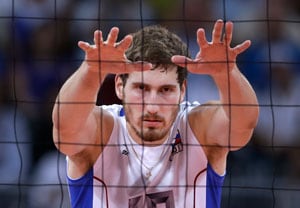 Russia will play for the Olympic gold medal in men's volleyball after defeating Bulgaria 3-1 on Friday.

The Russians, ranked second in the world, face the winner of the late semifinal match between top-ranked Brazil and No. 6 Italy in the final on Sunday.

Russia is vying for its fourth gold medal in the sport, which joined the Olympics in 1964. The Russians have won all 10 of their Olympic matches against Bulgaria.

Comments
Topics mentioned in this article
Volleyball Olympics 2012 Russia
Get the latest updates on ICC T20 Worldcup 2022 and CWG 2022 check out the Schedule, Live Score and Medals Tally. Like us on Facebook or follow us on Twitter for more sports updates. You can also download the NDTV Cricket app for Android or iOS.