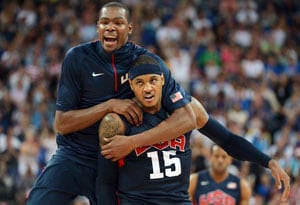 Kevin Durant scored 19 points while Carmelo Anthony and LeBron James added 18 each to lead the US multi-millionaires into a rematch of the 2008 Beijing Olympic final they won 118-107 over a similar Spanish squad full of NBA talent.

"This is the matchup everybody wanted to see," Anthony said. "Any chance to repeat for a gold medal is a great feeling. Anything less than this would have been unsatisfying."

The Americans reached the gold medal game for the 15th time in 17 attempts, having missed out in 1988 and 2004 after skipping the 1980 Moscow Olympics in a boycott.

The US NBA stars seek a 14th all-time gold medal against a Spanish side that defeated Russia 67-59 in Friday's other semi-final.

Argentina, led by 18 points from NBA star Manu Ginobili, will play Russia on Sunday for the bronze medal after fading in the third quarter against a US onslaught.

"We started very well in the first half but once they started to get the shots in and started to run, they were just better," Argentina's Carlos Delfino said. "When we made them play our game, we were close.

"They are masters, phenomenal, they play over the basket. When they are fit, they are unbeatable. They are the best in the world to run and shoot."

Argentina ousted the US squad in a 2004 Athens Olympics semi-final on the way to capturing gold before the Americans returned the favour in Beijing.

The US team improved to 61-1 since settling for bronze in 2004 and revamping the national team program with Mike Krzyzewski as coach and a versatile NBA all-star lineup.

"Anybody in this team can get going at any point -- that's the fun and dangerous thing about us," Anthony said.

The US NBA multi-millionaires had defeated Argentina 126-97 in a preliminary group match four days earlier, a physical contest in which Anthony was hit in the groin while shooting by Argentina's Facundo Campazzo.

While there were a few physical fouls, there was no sign of such antics this time around.

Ginobili sank a 3-pointer at the half-time buzzer and another to open the third quarter as part of a 14-6 Argentina run to pull within 47-43 just 21 seconds into the second half.

Reigning NBA scoring champion Durant sank two 3-pointers in a 8-0 US run to give the NBA stars a 59-46 edge, their largest of the game to that point, before Argentina fought back within 59-51.

That's when James drove to the basket, leaped high into the air and slammed in a dunk that produced a roar from the sellout crowd of 20,000 and touched off a 13-2 US run that separated the US stars from Argentina for good.

Durant had back-to-back 3-pointers and James added five more points in the key span, which left the Americans on top 72-53 and Argentina never threatened again.

"We had a good moment at the beginning of the third quarter but we made two or three mistakes," Ginobili said.

"When they get 10 to 15 points ahead, they just get inspired and it's impossible. You have to keep them between two and eight points if you want to have a chance."

The only stain on the US performance was a slight ankle injury to Russell Westbrook, leaving the guard a question mark for the final.

Comments
Topics mentioned in this article
Basketball Olympics 2012 Kevin Durant Spain
Get the latest updates on India vs South Africa and check out  Schedule, Results and Live Score. Like us on Facebook or follow us on Twitter for more sports updates. You can also download the NDTV Cricket app for Android or iOS.