Andy Murray will have to settle for one Olympic gold medal. Belarus's Max Mirnyi and Victoria Azarenka won mixed doubles gold medals on Sunday with a 2-6, 6-3, 10/8 victory over Britain's Andy Murray and Laura Robson. 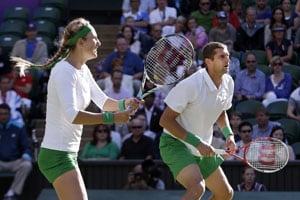 Mirnyi and Azarenka were the top seeds as mixed doubles returned to the Olympics for the first time since the Paris Games in 1924 and they lived up to their ranking by denying Murray a second gold after his singles final win against Roger Federer earlier on Sunday.

Less than two hours after his astonishing demolition of Federer, Murray had to settle for a silver medal on his return to Centre Court, but this defeat won't spoil a sensational week for the 25-year-old.

With Murray's confidence sky-high after becoming the first British man to win the Olympic singles gold medal since Josiah Ritchie in 1908, he and 18-year-old Robson started in dominant fashion with a break in the opening game.

They pressed home that advantage with another break in the third game when Murray's blistering return proved too hot for Azarenka to handle.

But, not for the first time in this mixed doubles event, Murray and Robson suffered a letdown after taking the opening set and Mirnyi and Azarenka broke for a 3-1 lead in the second.

That was enough to take the set and a first to 10 points super tie-break was needed to settle the match.

It was the Belarusians who won it after Murray and Robson both produced crucial errors.

Comments
Topics mentioned in this article
Andy Murray Tennis Max Mirnyi Victoria Azarenka Olympics 2012
Get the latest updates on Fifa Worldcup 2022 and check out  Fifa World Cup Schedule, Stats and Live Cricket Score. Like us on Facebook or follow us on Twitter for more sports updates. You can also download the NDTV Cricket app for Android or iOS.