Britain's Andy Murray progressed to the third round of the Olympics without any drama as the world number four defeated Finland's Jarkko Nieminen 6-2, 6-4 on Tuesday. 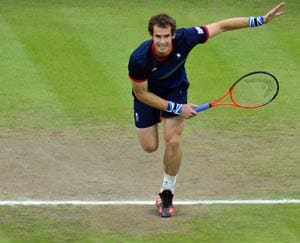 Britain's Andy Murray progressed to the third round of the Olympics without any drama as the world number four defeated Finland's Jarkko Nieminen 6-2, 6-4 on Tuesday.

The 25-year-old, who hit 26 winners to Nieminen's six, will face Cyprus's Marcos Baghdatis in the last 16 in a rematch of this year's late-night Wimbledon third round clash.

Murray laid down an early marker in a match played under the Centre Court roof due to rain, breaking world number 41 Nieminen in the first game and then hammering home his avantage with a second break for a 4-1 lead.

With the first set in the bag, Murray looked to finish off Nieminen and a break in the opening game of the second set put him within sight of victory.

Wimbledon runner-up Murray had too much grasscourt class for the Finnish left-hander and he easily served out the win to keep his bid for a first Olympic gold medal on track.

Murray's last meeting with Nieminen, at the French Open earlier this year, had prompted former Wimbledon champion Virginia Wade to call the Scot a "drama queen" after he appeared to exaggerate the effects of a back injury before suddenly storming back to win in four sets.

Comments
Topics mentioned in this article
Tennis Olympics 2012 Jarkko Nieminen Andy Murray
Get the latest updates on India vs Australia Series, check out the India vs Australia Schedule for 2020-21 and Ind vs Aus live score . Like us on Facebook or follow us on Twitter for more sports updates. You can also download the NDTV Cricket app for Android or iOS.