Maria Sharapova swept into her first Olympic final as the Russian world number three defeated compatriot Maria Kirilenko 6-2, 6-3 in the semi-finals on Friday. 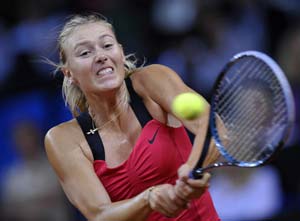 Maria Sharapova swept into her first Olympic final as the Russian world number three defeated compatriot Maria Kirilenko 6-2, 6-3 in the semi-finals on Friday.

The 25-year-old will play Wimbledon champion Serena Williams or world number one Victoria Azarenka in Saturday's final as she tries to complete the Golden Slam of titles in all four majors and the Olympic singles.

Sharapova is competing in the Games for the first time and the French Open champion is now guaranteed at least a silver medal following her dominant display against the 14th seed in a clash clashing one hour and 29 minutes on Wimbledon's Court One.

If Sharapova felt slighted by tournament organisers, who chose her match as the only one of the four men's and women's singles semi-finals to be scheduled on Court One, she didn't show it.

This was a composed display from the moment she landed the first blow with a break to love in the sixth game of the first set.

Sharapova pressed home her advantage with another break to take the set in convincing fashion.

Kirilenko had a chance to get back in the match when she broke for a 3-2 lead in the second set, but Sharapova quickly regained control with a break in the next game.

That seemed to shatter Kirilenko's spirit. Sharapova went for the kill and let out a scream of joy as she broke for a 5-3 lead.

There was a brief wobble from Sharapova with the finish line in sight as she fell 0-30 down, but the four-time Grand Slam champion recovered her composure, unleashing one stunning cross-court winner, before sealing the win on her second match point.

Comments
Topics mentioned in this article
Tennis Maria Sharapova Maria Kirilenko Olympics 2012
Get the latest updates on India vs South Africa and check out  Schedule, Results and Live Score. Like us on Facebook or follow us on Twitter for more sports updates. You can also download the NDTV Cricket app for Android or iOS.