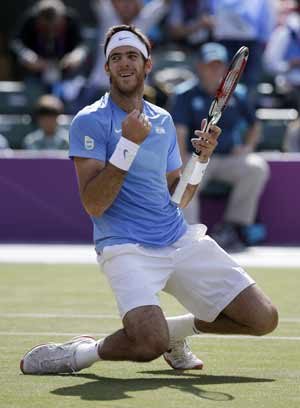 With his victory assured, Del Potro fell to the grass, covered his face with his hands and wept.

The Argentine has put in long hours on the grass courts at the All England Club. On Friday, he lost 3-6, 7-6 (5), 19-17 to Roger Federer in a semifinal that lasted 4 hours, 26 minutes. It was the longest three-set men's match of the Open era.

Comments
Topics mentioned in this article
Tennis Novak Djokovic Juan Martin del Potro Olympics 2012
Get the latest updates on ICC T20 Worldcup 2022 and CWG 2022 check out the Schedule, Live Score and Medals Tally. Like us on Facebook or follow us on Twitter for more sports updates. You can also download the NDTV Cricket app for Android or iOS.