Britain's Andy Murray clinched at least a silver medal on Friday and advanced to the Olympic final by beating No. 2-seeded Novak Djokovic of Serbia 7-5, 7-5. 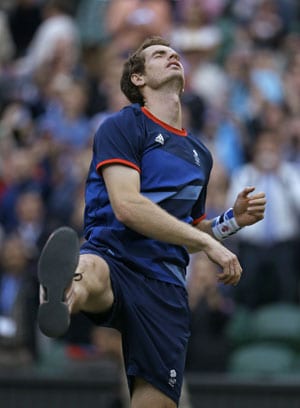 Britain's Andy Murray clinched at least a silver medal on Friday and advanced to the Olympic final by beating No. 2-seeded Novak Djokovic of Serbia 7-5, 7-5.

With the win, the No. 3-seeded Murray earned a rematch Sunday against No. 1 Roger Federer, who won when they met on the same court in the Wimbledon final a month ago. That dropped Murray's record in Grand Slam finals to 0-4.

"I'll be desperate to win on Sunday," he said.

Murray held all 12 of his service games and broke once in each set. When he ripped his final shot at Djokovic's feet for a winner, the partisan Centre Court crowd responded with a roar.

"It was one of the biggest wins of my career, and one of the most emotional, so, so happy to win," the usually dour Murray said. "You don't see me smiling that much normally, and I haven't stopped smiling since I came off the court."

Djokovic will play Juan Martin del Potro on Sunday for the bronze. Djokovic won the bronze in 2008.

Comments
Topics mentioned in this article
Tennis Andy Murray Olympics 2012 Novak Djokovic
Get the latest updates on ICC T20 Worldcup 2022 and CWG 2022 check out the Schedule, Live Score and Medals Tally. Like us on Facebook or follow us on Twitter for more sports updates. You can also download the NDTV Cricket app for Android or iOS.