Britain's Andy Murray demolished Roger Federer 6-2, 6-1, 6-4 in the Olympic men's final on Sunday to win his first gold medal and avenge his Wimbledon final defeat against the world number one. 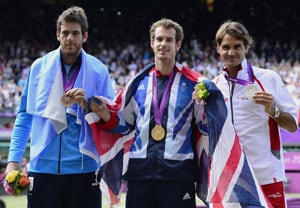 Britain's Andy Murray demolished Roger Federer 6-2, 6-1, 6-4 in the Olympic men's final on Sunday to win his first gold medal and avenge his Wimbledon final defeat against the world number one.

Just four weeks after breaking down in tears when Federer shattered his hopes of a first Wimbledon title, Murray returned to Centre Court to rout the Swiss great in just one hour and 56 minutes.

Murray, who has denied Federer a coveted first singles gold, could yet finish the Games with two gold medals as he will be back in action in the mixed doubles final with partner Laura Robson against Max Mirnyi and Victoria Azarenka of Belarus later on Sunday.

The 25-year-old Scot, beaten in three Grand Slam finals by Federer, has been in superb form all week, but even he hadn't dreamed he would win gold in such emphatic style.

Not only did the world number four do it by beating the Swiss for the first time since 2010, Murray also handed the 17-time Grand Slam winner his heaviest defeat in a major final since Rafael Nadal thrashed him for the loss of just four games in the 2008 French Open final.

"This is one of the biggest wins of my life," Murray said. "I have had a lot of tough losses in my career and this is the best way to come back from the Wimbledon final.

"I didn't expect this at the start of the week. I thought I'd go deep into the tournament but I felt so fresh today. It's amazing."

For Federer, a doubles gold medallist with Stanislas Wawrinka in Beijing in 2008, this final was meant to be the crowning glory of his career.

Instead, Federer, who will be 35 by the time the Rio Games are in full swing in 2016, may wonder if he will ever get a chance to win the Golden Slam of all four majors and singles gold.

Federer claimed tiredness had taken its' toll after his four and a half hour semi-final win over Juan Martin del Potro and said: "It was a tough tournament and maybe I was a little emotionally drained and left a bit too much out there in the earlier rounds.

"But Andy did play very well, he was much better than I was. Still, I have a medal in the singles. That's what I wanted."

When Murray gave Federer two break points in the opening game, his response to the crisis, a series of perfectly-placed winners, was symbolic of his impressive form this week.

The Scot's new-found maturity and increased muscularity are a potent package and he set about Federer with controlled fury in the sixth game.

A fine serve from Federer saved the first of two break points, but Murray came up with a searing return on the next and the Swiss could only direct his forehand into the net.

Everything that Federer threw at Murray was sent back with interest by the Scot, who clinched the first set with a second break when he smashed a backhand winner down the line.

Murray had taken the first set in the Wimbledon final as well before missing a chance to break in the second and then running out of steam.

He wasn't going to make the same mistake again.

In the second game of the second set, Federer put an easy smash into the net before the Scot enjoyed a slice of luck as two net cords in quick succession went his way to secure the break.

Federer tried to stem the tide in the next game, an epic struggle that featured six break points for the Swiss. But Murray wouldn't be denied and found the right response on each occasion.

The Swiss great had never been given such a torrid time on his favourite Centre Court. He looked shell-shocked by Murray's assault and served a double-fault on break point in the next game to give the Scot his eighth successive game.

With the second set in the bag, Murray kept his foot on the gas in the third and delivered the knockout blow when he produced a stunning winner to break for a 3-2 lead.

Federer had nothing left in response and Murray sealed the win with two thunderous aces before clambering into the players' box to embrace his family and backroom staff.

Comments
Topics mentioned in this article
Tennis Olympics 2012 Rafael Nadal Andy Murray Roger Federer David Ferrer Novak Djokovic Bernard Tomic Stanislas Wawrinka
Get the latest updates on India vs South Africa and check out  Schedule, Results and Live Score. Like us on Facebook or follow us on Twitter for more sports updates. You can also download the NDTV Cricket app for Android or iOS.