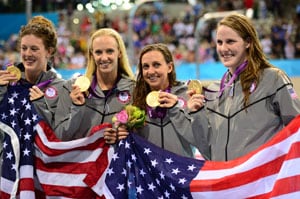 The American quartet of Franklin, Rebecca Soni, Dana Vollmer and Allison Schmitt swam 3min52.05sec to lower the previous record of 3:52.19 set by China in winning the world title in Rome in 2009.

It was the ninth world record at the Aquatics Centre over the eight-day meet.

For 17-year-old Colorado high school student Franklin it was her fourth gold in the final women's pool event of the Games along with a bronze earlier in the meet in the 4x100m freestyle relay.

Franklin, Vollmer and Soni had all set individual world records at the London Aquatics Centre.

"It has been the most incredible experience in the world," Franklin said.

"The four golds are absolutely incredible. I will never forget the experience and this will always be living in my heart.

"I led off in all three relays which was kind of fun."

Soni put in a 1:04.82 breaststroke leg, Vollmer clocked 55.48sec for butterfly leg and Schmitt brought it home in 53.25 in the final freestyle leg.

Comments
Topics mentioned in this article
Olympics 2012 Swimming
Get the latest updates on ICC T20 Worldcup 2022 and CWG 2022 check out the Schedule, Live Score and Medals Tally. Like us on Facebook or follow us on Twitter for more sports updates. You can also download the NDTV Cricket app for Android or iOS.